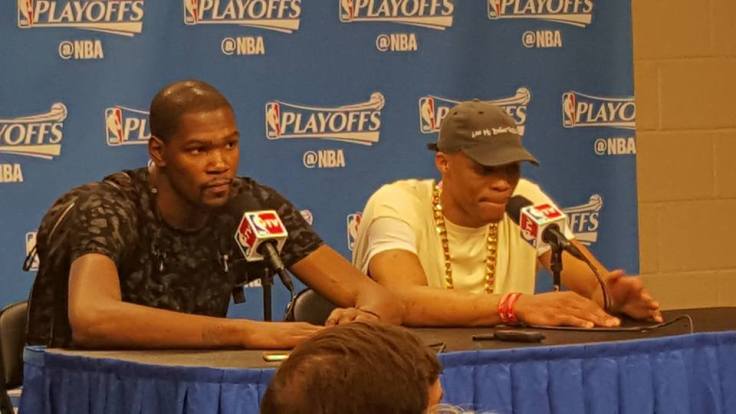 DALLAS – For two days members of the Dallas Mavericks claimed the Oklahoma City Thunder were a dirty team. Coach Rick Carlisle especially called out Kevin Durant for what he considered dirty plays in Game 3.

So it should not have been a surprise that Game 4 of the first round Western Conference matchup saw the intensity rise, including a couple of altercations.

The Thunder held off the Mavericks for an 119-108 victory at the American Airlines Center Saturday night and grabbed a 3-1 series lead. However, all the talk was about a Flagrant Foul 2 called on Durant late in the game

“I don’t believe they are trying to hurt us and we’re not trying to hurt them,” Durant said. “No one is looking to injure anybody. We’re just playing the game. It’s physical, we’re going to do some talking. Going to be some shoving here and there cause that’s how competitive teams go out there. But for the most part no one is dirty. I know Carlisle and (Mavs Owner) Mark Cuban want to tell you guys that. But we’re just going out there playing.”

Oklahoma City had six players score in double figures. Enes Kanter came off the Thunder bench to post a game high 28 points and grab six rebounds. Russell Westbrook added 25 points and 15 assists. Durant was held to 19 points, which ended his streak of 67 games of scoring at least 20 points. (Officially the playoffs do not count). So his regular season streak is still alive.

“I thought we played very, very well offensively tonight,” coach Billy Donovan said. “Really for the entire game. We had good ball movement. I thought we got a lot of contributions from a lot of different guys.”

The Mavericks were led by Dirk Nowitzki, who poured in 27 points on 12 of 21 shooting. Raymond Felton and Wesley Matthews each added 19 points in the loss.

“We have to clean a couple of things up,” Carlisle said. “They have two superstar players and I thought we played them a lot better tonight than we did in Game 3. We just have to keep playing as hard as we did tonight.”

However, when Carlisle was asked about the physicality of the series, he chose to avoid the question, even though he was the one who brought it up two days ago.

“I’m not talking about that,” Carlisle said. “Do you have questions about basketball?”

With 6:35 left in the fourth quarter, Kanter completed a three-point play that gave Oklahoma City a 101-88 advantage. On the ensuing possession, Dion Waiters hit a free throw to push the advantage to 15.

Dallas had a chance to get the deficit into single digits, but the Mavs missed a pair of shots on the next possession. The Thunder made them pay with a delayed fastbreak that ended with a Kanter layup.

A Nowitzki 3-point play got the lead down to nine before Kanter connected on another free dunk.

Kanter put the Thunder up 112-99 with 2:30 left with another old-fashioned 3-point play. He had 16 points on the fourth quarter alone.

“I think the stuff he does is unbelievable,’” Westbrook said of Kanter. “I’ve always respected Jamal Crawford, but I honestly don’t think it should have been close for Sixth Man of The Year. Enes is a guy that shoots 68-69 percent from the field and goes 12 of 13 in games like this. He’s been doing it all season.”

However, a frustrated Durant came across the face off Justin Anderson and was assessed a Flagrant Foul 2. That’s an automatic ejection and could mean him missing Game 5 in Oklahoma City.

“The League Office maintains the right to impose a fine and/or suspension upon any player who commits a flagrant foul at any time during the Playoffs,” according to NBA.com.

Durant said he texted Anderson after the game to let him know the foul wasn’t on purpose. The two players, who attended the same high school, met after the game and took a photo together with their high school coach.

“I wasn’t trying to hurt him at all,” Durant said. “There have been plays this season where I have blocked shots coming from behind like that. It’s unfortunate I fouled him on the head. “It was a flagrant, even though I wasn’t trying to intentionally foul him.”

However, that didn’t satisfy the Mavs Salaj Mejri, who believes Durant is going after rookies who have no clout.He says Durant elbowed him in Game 3.

“I don’t know why he’s coming after two rookies,” Mejri told The Dallas Morning News. “Why doesn’t he do this against other players? If he’s got balls, then he has to do that.”

Earlier in the second quarter that tempers started to flare when the Mejri got into a shoving match with Anthony Morrow on the Oklahoma City bench that stopped the game for a few minutes. Mejri and Westbrook were called for technical fouls.