In the 1939 book Grapes of Wrath, author John Steinbeck depicted the plight of an Oklahoma farming family, the Joads, who had to pick up their roots and leave home because of a lack of water. The book and movie that followed were set during the oil bowl when Oklahoma was seen as barren land and desolate.

That is a far cry from what has been created in downtown Oklahoma City. With already a world class rowing venue on hand, the Boathouse District has now added a $45.2 million whitewater rafting and kayaking center to its growing lists of attractions that are changing the perception of the state.

“It helps redefine the image of Oklahoma,” said Mike Knopp, Boathouse District Executive Director. “We have that decades old image of dry and dusty Grapes of Wrath, dust bowl kind of thing. Now that we’re one of the premier venues in the world for water sports, I think is very powerful.”

The Boathouse District introduced it’s latest attraction, RIVERSPORT Rapids in RIVERSPORT Adventure Park over the weekend. It was in conjunction with the Road to Rio Tour in which athletes competed for spots in the upcoming summer Olympics in Rio.

One of those who took part was Casey Eichfeld, who competed in the mens’ single and double canoe. Eichfeld had already locked up a trip to his third Olympics, but he wanted to come and try out the newest whitewater rapids center in the United States.

“This place is incredible,” Eichfeld said. “It’s really cool. For us, the more venues like this we can have, the better for our sport. We want to see our sport survive and thrive long after my career. Venues like this give us an opportunity to have new clubs, bring new kids into the sport, to really get the community involved. So that’s exactly what we need and this place is perfect for that.”

RIVERSPORT Rapids occupies 11 acres of land near downtown Oklahoma City. According to Knopp, that makes it the only urban whitewater center in the world.

The idea sprang up at around the same time the rowing center was being built on the Oklahoma River. But it wasn’t until MAPS 3 ( the one-cent sales tax initiative dedicated to metro area projects) was put on the ballot and residents voted to raise the money to create the world class center.

“I thought it would be unique to have both together,” Knopp said. “And the fact that we can have a whitewater center next to a downtown, that’s very unique. Typically you see these in the middle of the mountains. The fact that it’s an urban course adjacent to a world class flat water course created this incredible opportunity for Oklahoma to really stand out in the world.”

Oklahoma City Mayor Mick Cornett is one of those who saw the possibilities of having the centers so close to his city.

“I think it has been very successful,” Cornett said. “If you’re talking about the entire river development, it’s been 20 years in the making and it’s continued to grow. I think this latest investment in the whitewater facility is going to secure that we have the finest venue in the world for the sports of canoe, kayaking and rowing.”

The whitewater facility is not just for world class athletes. There are two channels of water. One is for competition and the other is for recreational use. The latter is 1,600 feet long and the trip last almost 20 minutes.

According to RIVERSPORT, more than 2,000 people will be able to raft in a single day. That makes Oklahoma one of the biggest rafting facilities in the world.

“It’s a big idea. Kind of bold,” Knopp said. “Oklahoma has kind of a pioneering spirit. The fact we’re going to try and stand out in the world for something that would be the least expected thing people would think of. We’re at the crossroads of America. I-35 meets I-40 at the Whitewater center. It’s now a destination for people outside of Oklahoma City to come, but it’s for our community to enjoy. I think it’s going to be a game changer for central Oklahoma in terms of tourism. Dallas doesn’t have this, Kansas City doesn’t have this, L.A., Chicago, big world class cities don’t have what we have in our downtown area.” 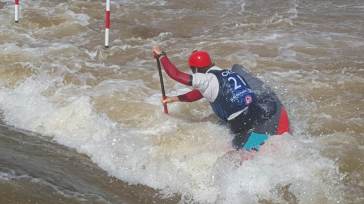