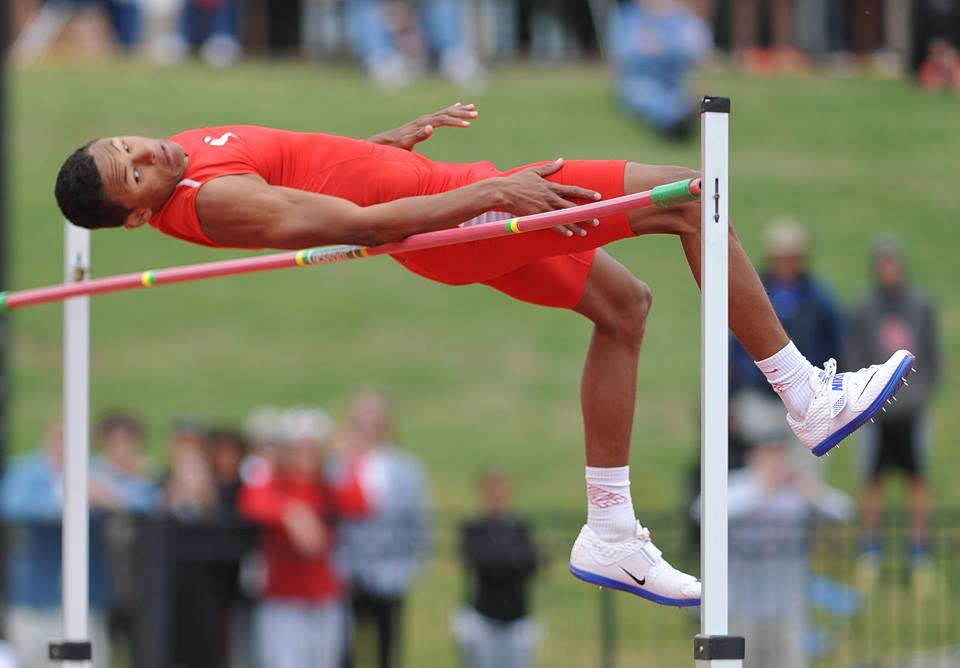 MOORE – The actual competition was over long before Vernon Turner started to really jump at the 6A state track and field championships. By the time the end of the 6A boys high jump came, only  Turner was left standing.

Turner, who won the state title last year, had already sewn up his second consecutive high jump championship Saturday when the bar was set at 7-foot-4 ½. At that point, Turner’s only competition was himself.

Looking to set a new personal best, Turner failed to clear the bar on his first two attempts. With the weather hovering below 60 degrees and the wind blowing, Turner had a brief conference with his coach before trying his third and final attempt.

This time, Turner arched his back and kicked his legs up to successfully clear the bar. He bounced off the mat, threw his fist down in celebration.

“It’s pretty special,” Turner said. “I was looking forward to this and finally beating the state record, again. Beat my record again. It feels good to go back to back. I’m only a junior so it feels amazing.”

Not only did Turner set a new state record, which he had just set the week before at regionals, and win the state title, but he also set the top make in the nation this year for prep high jumpers.

However, Turner wasn’t done. He decided to go up another level and set the bar at 7-5 ¼, which is the automatic qualifying mark for the Olympic Trials.

Unfortunately for Turner, his legs had lost their spring by that time and he failed on all three attempts.

“I thought I had a chance,” Turner said. “My legs were just too tired toward the end. Too many jumps. But I think I will be able to get it.”

After his final jump, what seemed like the entire crowd at Moore High Stadium, gave Turner a loud ovation.

“It’s just nice for people in Oklahoma to all be supportive,” Turner said. “It’s really cool they support everybody that’s out here. Thank you to all of them. It’s nice of them.”

Turner’s next closes competitor was Noah Payne of Owasso. He took second with a leap of 6-8, the same height Turner was the title with as a sophomore.

Turner’s hasn’t given up on trying to get to the Rio Summer Olympics. He said he’s considering some trips out west to compete in national tournaments.

“I am hoping I can qualify for the Olympic people,” Turner said. “I need to get 7-6, 7-7. Be up there. I would be excited. I wouldn’t even know what to do. We are going to try. We are going to go down to Oregon and go try. We’ve been talking about it for a little bit now.”