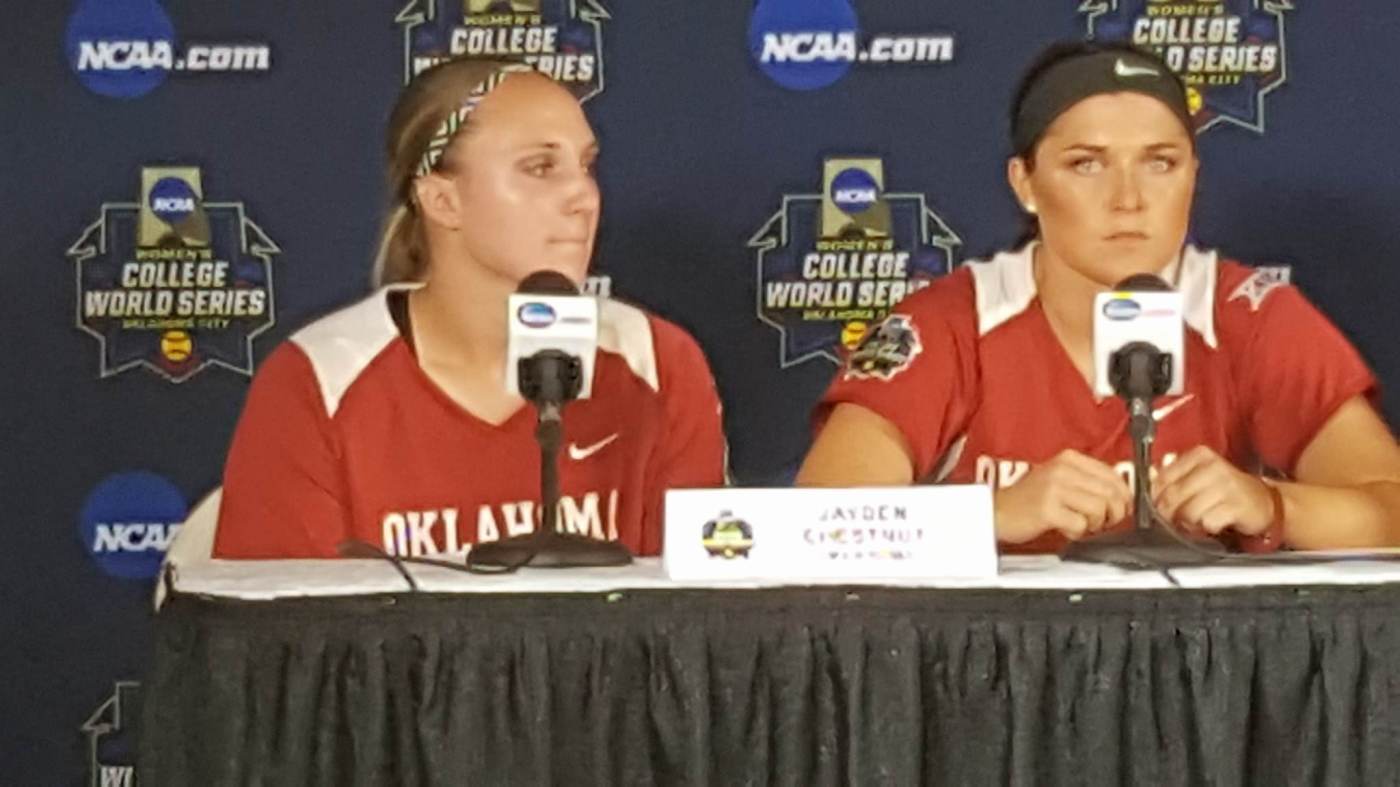 OKLAHOMA CITY – Jayden Chestnut finally got her first taste of the Women’s College World Series. Through four games of the tournament the Oklahoma freshman had only watched as Paige Parker pitched every inning.

But with Parker getting the night off Tuesday, Chestnut finally got the call she had been waiting on. Unfortunately for her, she was on the wrong end of one of the most remarkable comebacks and finishes in World Series history as the Sooners lost 11-7 to Auburn at the ASA Hall of Fame Stadium.

“Quite a game,” OU coach Patty Gasso said. “Another tough game for two teams that played really hard. Jayden Chestnut specifically fought her tail off tonight. I thought our offense came out and attacked early, then we just went a little stagnant. That hurt us. We make no excuses for the loss. We just needed to execute a little bit better.”

The game was tied at 7-7 heading into extra innings. When the Sooners didn’t score in the top of the eighth, it set up the Tigers to find a way to win it in the bottom of the inning.

After Chestnut got the first out, she allowed a bunt, a single and a walk to load the bases. That brought Auburn’s Emily Carosone to the plate. Chestnut delivered the first pitch and Carosone crushed a grand slam over the right field fence to end the game.

“Really right before I got in the box I was thinking, hit it hard, because if I hit it hard and it went somewhere, Victoria (Draper) was going to score no matter what,” Carosone said. “But I don’t know, that pitch was just there. It was – softball is a game of inches, and my bat was there. It’s amazing. God is good. God is good.”

The Tigers scored 11 straight runs to close out the game and tie the championship series at 1-1. It sets up a decisive Game 3 at 6 p.m. tonight with the winner being crowned the national champion.

Parker will be back on the mound for the Sooners. Not letting her pitch Tuesday was not a difficult decision for Gasso, who wanted her ace to be at 100 percent.

“Paige having this night off I think will help her tremendously for (Wednesday), and like I said, whether we have gas in our tank or not, we’re going to do everything we can tomorrow as a team,” Gasso said.

Malayka Martin picked up the win while Chestnut (9-1) suffered her first defeat of the season. She pitched 5.2 innings, allowed 11 hits, six runs and struck out three.

“I mean, I was always ready to go in, and I had a lot of excitement about it,” Chestnut said, “And my plan was to just go in and be fearless and keep us in the ballgame, and I think I executed that pretty well.”

Auburn’s Kaylee Carkson found herself in a jam at the very start. The Sooners had runners on second and third with Fale Avlu at the plate. Avlu hit a dribbler to second base and beat out the throw to knock in the first run of the game.

Kady Self added to the mounting problems in the second inning when she clobbered a solo homer into center field. Two straight defensive miscues by shortstop Whitney Jordan led to another run scoring.

The game was on the verge of getting out of hand when Caleigh Clifton and Shay Knighten laid down perfect bunts to plate two more runs.

After Sydney Romero singled in a run and Auburn had yet to register an out, Carlson was pulled for Rachel Walters. Nicole Pendley added another RBI before Auburn finally got out of the 2nd inning trailing 7-0.

Auburn quickly got over the shock of the onslaught and put three runs on the board in the bottom of the inning. Jordan did the honors with a 3-run homer off Stevens. An error by Self in left field allowed another run to score and Stevens was taken out of the game.

That brought Chestnut into the game. The Tigers loaded the bases and had an opportunity take the lead, but Chestnut struck out Jade Rhodes to end the inning leading 7-5.

The 11 total runs scored by both teams was the most in a single inning in championship series history.

Chestnut gave up a 2-run homer in the fourth inning that tied the game at 7-7. She kept the Tigers bats silent until the eighth.

“Yeah, it obviously didn’t turn out my way and it stings a little bit,” Chestnut said, “but I think it’s just motivation to come out tomorrow and just fight even harder.”

Now everything is riding on one game to win it all. The Sooners are confident they can get it done.

It’s about resiliency,” Erin Miller said. “It’s about how you answer. I think we’ve done a great job of that all season. Someone throws a punch, you throw it back. That’s the game of softball, I think. You’re going to see a dogfight tomorrow. It’s for a national championship; why wouldn’t you?”

Michael Kinney is a freelance writer and can be reached at Eyeamtuth@gmail.com