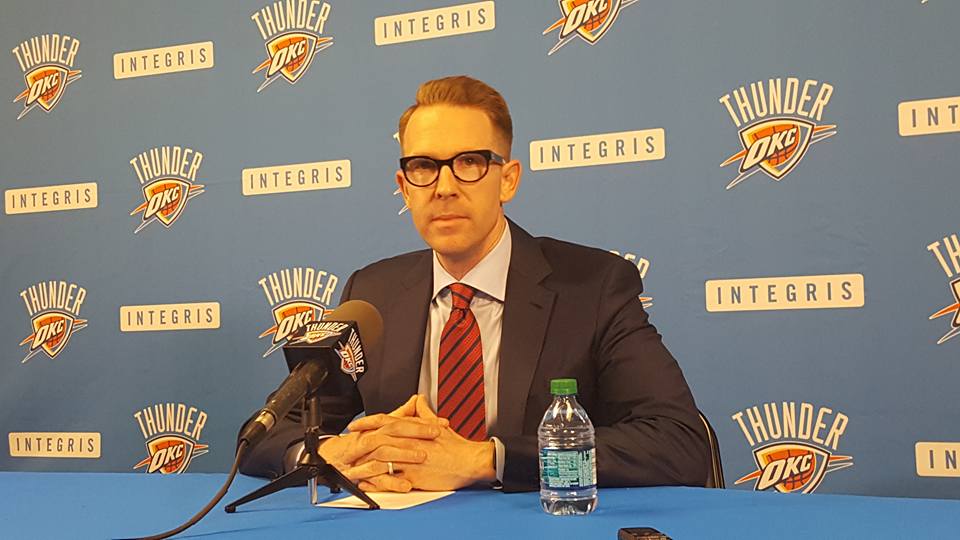 Oklahoma City General Manager Sam Presti talks to the media at the end of the 2016 NBA Draft Thursday.

OKLAHOMA – Hours before the NBA draft tipped off Thursday night, rumors of a major shakeup with the Oklahoma City Thunder began to float around. The word was that the Thunder were in the shopping mood and looking to trade veteran forward Serge Ibaka.

But as the draft got closer, that rumor began to fade and it seemed the Thunder were going to be left with the prospect of having a pretty boring draft night. With no picks in either the first or second round, it quickly became evident Oklahoma City General Manager Sam Presti might be watching from the sideline.

However, Presti has proven he’s not a bench warmer when it comes to building teams. He pulled the trigger on a trade that shipped Ibaka to the Orlando Magic in what could be considered a mini-blockbuster for a team that was one win away from an appearance in the NBA Finals.

Yet, they had to lose Ibaka to make it happen.

“(Serge) has been absolutely integral to helping us create a foundation of sustainable success for the Thunder,” Presti said. “He’s been a great citizen of Oklahoma City, and we’re confident that he’s going to continue his career trajectory with the Magic in Orlando.”

In return for the 26-year old Ibaka, the Thunder received guard Victor Oladipo, forward Ersan Llyasova and the draft rights to Domantas Sabonis, who was taken with the No. 11 of the first round.

“I think there is a common thread with the three players that we brought back in this particular trade,” Presti said. “These are really serious basketball players. Really high-character people, and guys that I think understand how to contribute to winning and understanding.”

With the addition of Oladipo to the lineup with Russell Westbrook, the Thunder now have one of the most athletic backcourts in the league. The 6-foot-4, 210 pound guard provides defensive pressure and a constant offensive threat. He averaged 16 points, 3.9 assists and 4.8 rebounds this past season.

“I think the number one thing with Victor is his make-up. You know, this is a guy that we’ve looked at for a long time,” Presti said. “He is tough-minded, he’s competitive, he’s selfless. He is a guy that we really feel like not only brings things on the floor for us, but I think he’s going to be a real add to our environment, our culture on an everyday basis.”

Oladipo’s presence also could mean the end of Dion Waiters time in Oklahoma City. Waiters is a free agent and was seeking a long term contract, possibly at a price that was too big for what the Thunder were willing to pay.

“You know, that’s an interesting question, because we really like the fact that we could potentially have several players on our team now that can attack the paint, that can guard different positions,” Presti said. “They all play with force. It’s intriguing. Like we have to sit down and sort through that, but I think it’s pretty rare that you have all of these different players that can play pick-and-roll, that can get into the lane, that have good vision. So that remains to be seen. But, obviously, Victor gives us coverages there. At the same time Dion has shown to be a really good fit the same way. So I’m interested to see that, to be honest with you.”
Sabonis is a 20-year old native of Portland and the son of former Trailblazer Arvydas Sabonis.

The younger Sabonis, 20, played at Gonzaga where he averaged almost 18 points, 12 rebounds and shot 61 percent from the field.

When Sabonis was interviewed after being drafted, it was unclear if he knew he had been traded to Oklahoma City since he was still swearing a Magic hat.

Sabonis was asked what he feels about playing next to Adams.

In the closing minutes of the draft night, Presti pulled off another move that gave the Thunder the rights to 6-foot-7 forward Daniel Hamilton. In two seasons at UConn he averaged just over 11 points and eight rebounds.

But the entire night was about Oklahoma City moving one from one of its building blocks in Ibaka.

In his final season in Oklahoma City, he averaged 12.6 points, 6.8 rebounds and 1.9 blocks. He had been with the franchise since he was drafted by the Seattle Supersonics in 2008 with the 24th overall pick.

With the emergence of Steven Adams and Enes Kanter throughout the season, Ibaka saw the team’s dependence on him decrease. That was especially evident in the postseason.

Ibaka was also heading into the final year of his 4-year contract where he would be making $12.35 million.

In his time with Oklahoma City, Ibaka made the ll-Defensive First Team three times and led the NBA in blocks twice. After beginning his career in Oklahoma City as a defensive demon, he began the transformation of becoming a stretch four. During his exit interview he announced he was making the full conversion to a forward who just shoots 3-pointers and that may have signaled the end to his tenure with the Thunder.

“Time flies. 7 years in Oklahoma City, a place where I grew up, became the player I am today, competed with a great team and made great friends,” Ibaka posted on social  media. “A place I can call home. Thank you state of Oklahoma and your wonderful people. Thank you @okcthunder, staff, employees, teammates and fans. You will be in my heart forever.”

Ibaka, Westbrook and Kevin Durant had matured from teenagers into grown men together in Oklahoma City. Along with Nick Collison, they were all that was left from the team that went to the 2012 NBA Finals.

But once again Presti showed he’s not afraid to make moves to keep his roster flush with young talent. As the Durant free agent sweepstakes continues to play itself out, that may be the most important thing accomplished on draft night.

“The thing we’re always focused on is how we make the organization better,” Presti said. “How we look to aggressively pursue progress, pursue improvement, and we thought this was an opportunity to do that. As I said before, the combination of players that we’re getting back, we feel really fit our team. And, and we always have to do what is best for our team.”

Draft Notes: For Oklahoma fans, they didn’t have to wait long to see Buddy Hield taken. The National Player of the Year was taken sixth overall by the New Orleans Pelicans.

Hield sported a white and maroon jacket and flashed little buddy buckets signs as he climbed the stage to shake the hand of the commissioner.

“I am just happy, my family is happy considering where we came from,” Hield said during the telecast. “Just glad to be here. We couldn’t have done it without God. I am just thankful God has blessed me in this moment.”

The last Oklahoma player to be taken in the first round was Blake Griffin with the No. 1 overall pick in 2007.

The Sooners’ Isaiah Cousins was drafted by the Sacramento Kings with the 59th pick in the second round. This is the first time in the Sacramento-era the Kings have selected a player from the University of Oklahoma.