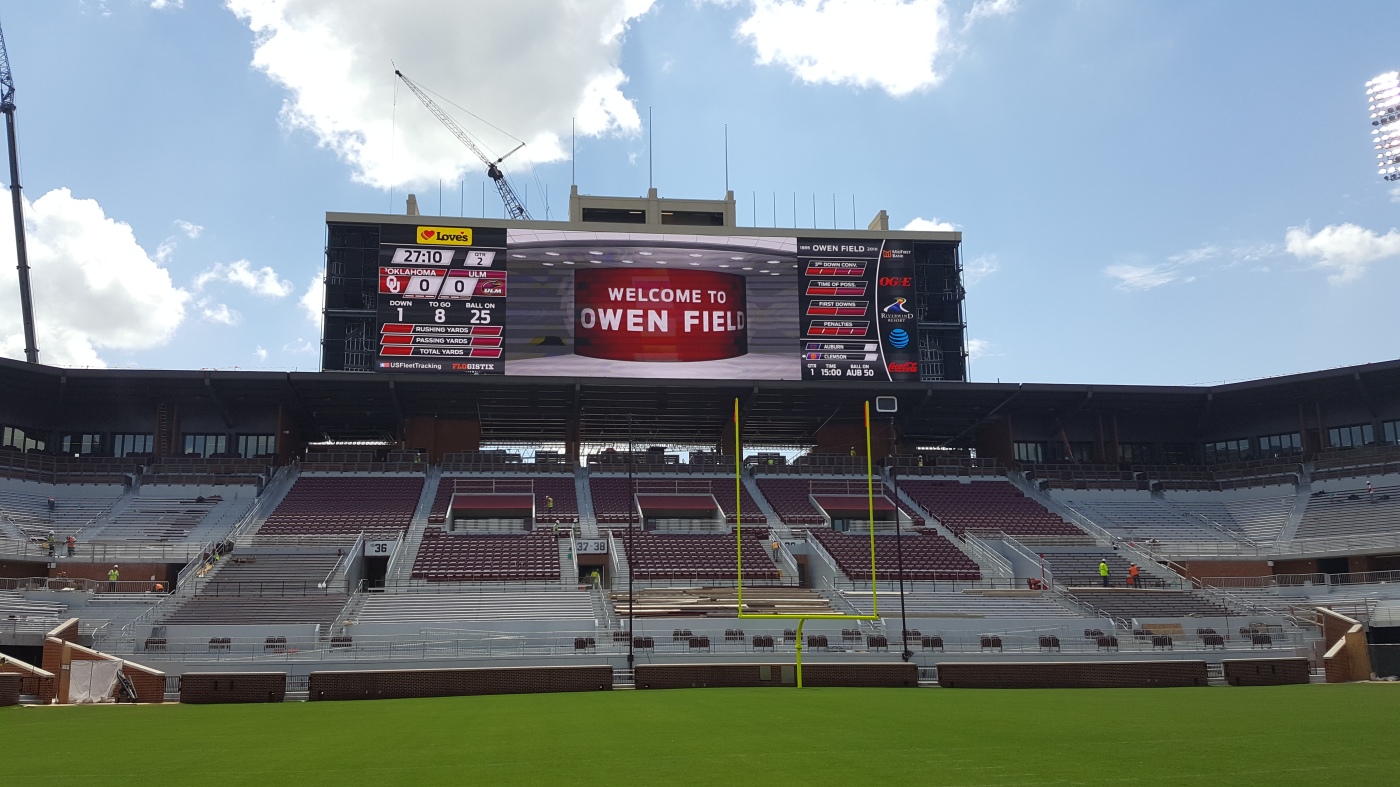 NORMAN – Oklahoma Athletic Director Joe Castiglione announced a couple of years ago that Memorial Stadium was going to get a face-lift. After watching other major college football programs around the country update their home fields, the Sooners decided it was time to do the same.

When OU opens its doors Saturday for the team’s 2016 home opener versus Louisiana-Monroe, fans will get their first look at Castiglione’s (nearly) completed vision.

“When you think about what this project has been since we broke ground, it’s truly amazing,” Castiglione said. “I don’t even want to engage in any kind of hyperbole about the magnitude of this project. But just to refresh your memories, we broke broke ground last August. We were able to get some work done around the football season in 2015. But the majority of the work started as soon as the Kansas State game was complete.”

The minute the game against the Wildcats ended, Castiglione has gotten the same question over and over. Will the stadium construction be completed on time?

“When we started this project, we didn’t give the contractor any alternative,” Castiglione said. “It had to be ready when our first home game occurred Sept. 10. The project has been going very, very well. There is a lot to do and they are taking every chance to get as much work done in a day and night as one can.”

The reason why fans and outside observers were concerned the stadium wouldn’t be completed on time is due to the enormous size and details of the $160 million renovation project. Work on the outside of the stadium will be ongoing throughout the season.

“Mother Nature has been very good to us as well,” Castiglione said. “We’ve had some weather events, but as we always know, it could be worse and we’ve been able to make good use of a lot of dry weather, and again, staging the crews and sequentially working through various aspects of what they needed to do and when, we were able to make things happen and keep it rolling on a smooth timetable…. By the time we get through with this project, we will probably past the one million (work) hours mark for construction.”

The new seating capacity of Memorial Stadium has been raised to 83,489. That’s an additional 1,500 to 1,800 seats that have been installed to make Memorial full enclosed.

Other new attributes of the stadium include more than 450 televisions, a new WIFI and cellular service, a fan plaza, escalators and a new sound system.

“You all don’t know this about me, but I love music of every genre. I do,” Castiglione said. “But I started tuning it out after I had heard Janis Joplin for the 50th time in a row when they were testing it. I guess whatever it was testing it, that must be something with that song that allows the engineer to test the various ranges of the sound system. But it played over and over and over again. I haven’t been out there since the day they were originally testing it. It’s an entirely different configuration between the type of speakers, the number of speakers.”

The biggest detail fans will notice is the new 8,750 square feet video board. It will be the second biggest in college football behind Auburn. In comparison, it’s still no where near as big as the video board at the Dallas Cowboys AT&T Stadium, which is 23,040 square feet.

Yet, according to Castiglione, even he was surprised by the power and brightness of the new video board at OU.

“Two days (after video board testing began), at about 5:15 a.m., I was leaving my house in the morning to come over and work out. I turned from Tecumseh Road to the on-ramp of Interstate 35,” Castiglione said. “Usually, when it’s dark, you can see the Embassy Suites lit up in green. It was obliterated because there was what looked like a strobe light showing going on between red, white and blue colors.

“At first, I didn’t know what it was. I wasn’t tracking that at that time in the morning, that could be the video board. That’s when I realized, this is a whole different viewing experience.”

Michael Kinney is a freelance writer and can be reached at Eyeamtruth@gmail.com