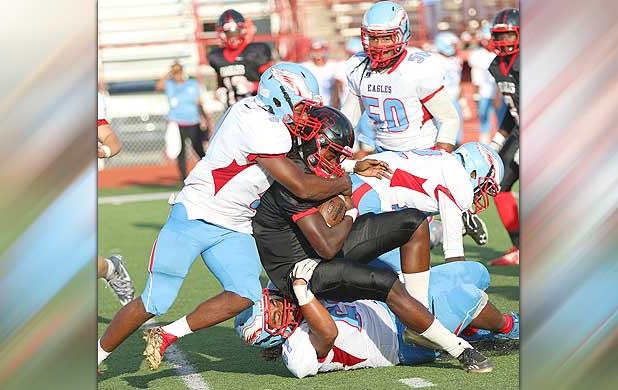 DEL CITY – One week after a second half collapse against MacArthur, Eisenhower found itself in a down-to-the-wire contest. Facing Del City on the road, Ike had every opportunity to claim its first victory of the year and the first one for new head coach Mike Burris.

However, in the final seconds, the Eagles were unable to make the big play when needed and fell 41-34 to Del City at Robert Kalsu Stadium.

“We played a lot better,” Burris said. “We did a great job of rotating our line and kept them pretty fresh. Just ran out of gas there at the end. We had a good play called, just didn’t work out.”

With 7:18 left in the game, Eisenhower (0-2) trailed by seven when it took over the ball on its own 20-yard line. Ike needed to go 80 yards just to have a chance to tie the game.

However, Ike was only able to get one first down and were forced to punt with 4:25 left on the clock.

It was up to the defense to keep the team’s hopes alive. And that’s what it did when it forced a fumble and recovered the ball near midfield.

Quarterback R.J. Fisher drove the offense down inside the 10 yard line and had three shots to get into the end zone. The Del City (2-0) defense, however, held Ike and forced it into a 4th-and-goal from the six-yard line with 54 seconds left.

Fisher took the snap and rolled to his left. He had the option of running or throwing into the end zone. He chose the latter and tried to hit Kinyon Parker, but the pass was deflected and DC held on to win.

“I think we called the best play we could have called and they just defended it well,” Fisher said. “Maybe I should have kept it. We’ll see on film.”

Despite the defeat, Eisenhower left the game optimistic about their performance.

“i feel like the team gave a lot of fight,” Mookie Douglas said. “We didn’t pull it out on the fourth down over here, but I’m real proud of my team. We gave effort. A 100 percent effort this game.”

Marquell Calcote got the game started off with a 70 yard kick-off return down to the Del City 30 yard line. It put EHS in prime scoring position right off the bat.

The Eagles drove the ball down to the 3-yard line before they were stuffed on three straight plays. Burris chose to go for it on fourth down and put the ball in the hands of Fisher. He hurried down the line and drew the defenders to him. At the last second, he pitched the rock to Kenneth Graham, who went untouched into the endzone.

However, it took Del City less than three minutes to respond with their own 80 yard drive and score to even the contest at 8-8.

Graham put Eisenhower back on top when he sprinted 49 yards down the right sideline for his second TD of the first quarter.

It looked like the Del City was going to answer right back with another score when they drove the ensuing drive down to inside Eisenhower’s 20 yard line. But on third down, Del City’s receiver caught a slant in front of the endzone and was about to walk in for a touchdown when Bradley Washington came out of nowhere to level the wide-out and knocked the ball loose. EHS recovered the fumble.

But that only delayed the scoring. DC quarterback Christian Hoover threw two more touchdown passes for Del City to give them a 22-14 advantage heading into halftime.

Coming out of halftime, it was Eisenhower’s defense that made the first big play. Tre Harris came up with an interception on Del City’s first possession. That led to a Fisher touchdown run that tied the game at 22-22.

Hoover and Fisher exchanged touchdown passes late in the third quarter to keep the game tied. Fisher’s was a 30-yard, high arcing bomb to Kinyon Parker. The two signal callers had their own personal duel going.

Fisher then connected with Douglas for a quick pass into the flats. Douglas scooped it off the ground in the endzone and turned it into a 98-yard touchdown to put EHS up 34-28 heading into the fourth quarter. Douglas had eight catches for 141 yards.

“I just knew the team needed a play, a big play,” Douglas said. “I’m a big time player and I needed to come get it. I needed to get the touchdown.”

Even though they are 0-2, the Eagles head into their matchup next week with Lawton High feeling like they can earn that first victory.

This story first appeared in The Lawton Constitution.