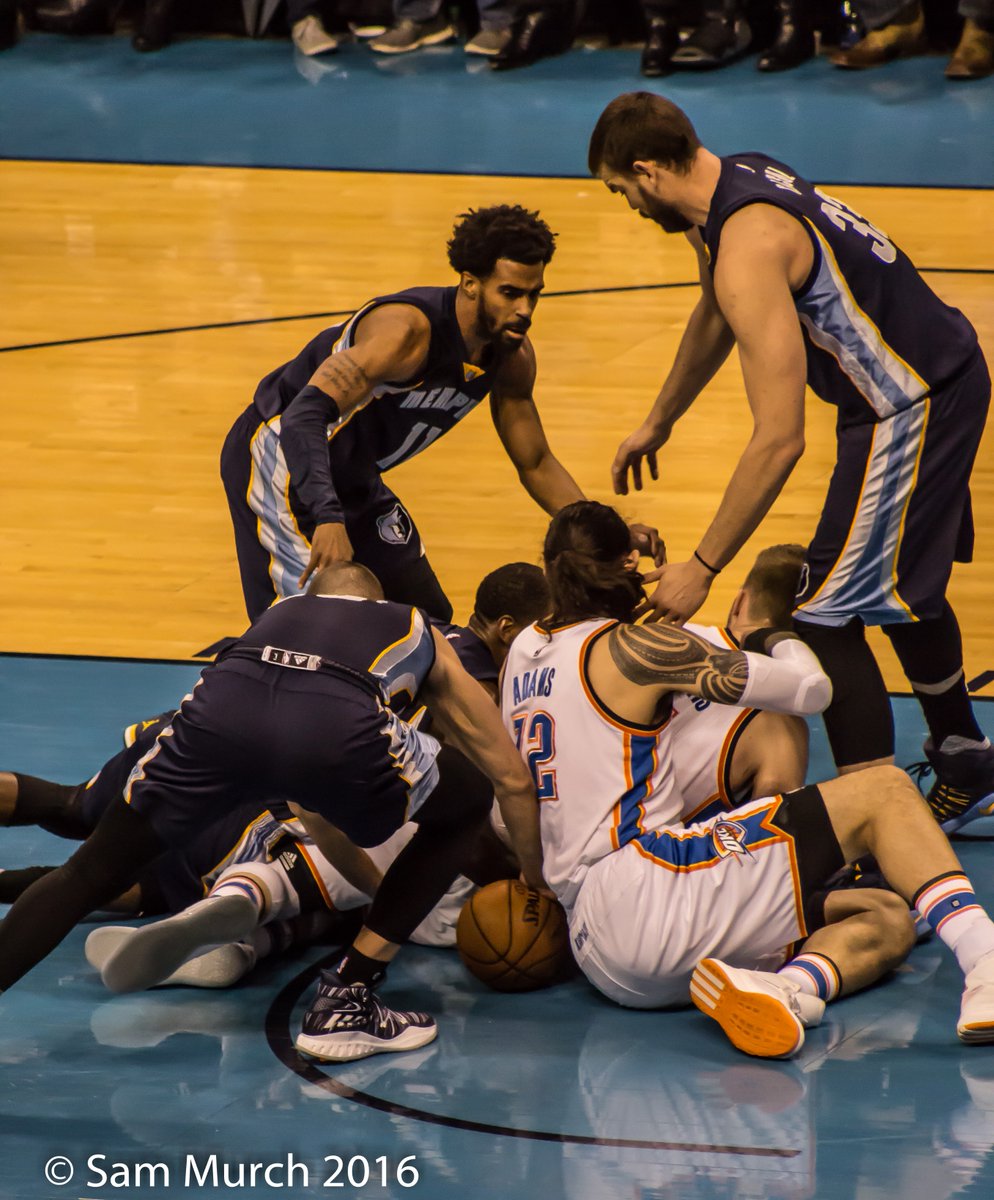 OKLAHOMA CITY — Oklahoma City needed a win. The last time out the Thunder were blown off their home court by 28 points.
That didn’t sit well with Russell Westbrook, who said his team was outplayed. The all-star point guard was going to make sure that wasn’t going to happen again any time soon.
Racking up his 25th triple-double of the season, Westbrook led the Thunder to 114-102 victory over the Memphis Grizzlies on Friday night at Chesapeake Energy Arena.
Knowing how important the game was, Westbrook said his team had to strike first and often.
“Especially after last game when you lose and get outplayed,” Westbrook said. “Tonight we came out and were the more physical team. Set the tone in that aspect. We were physical, came out and hit first in a grind-it-out game.”
Westbrook racked up 38 points, 12 assists and 13 rebounds. That included scoring the final 15 points for Oklahoma City.
Steven Adams had 16 points for the Thunder. Joffrey Lauvergne came off the bench to score 16 points as the Oklahoma City improved to 29-22 and ended a three-game losing streak.
Marc Gasol led the Grizzlies with 31 points and eight assists. Mike Conley added 18 points on 7-of-16 shooting from the field as Memphis fell to 30-22 and ended a three-game win streak.
“It’s disappointing,” Conley said. “This is a big game for us, not just because it’s OKC, but the schedule, the standings. These games matter for us.
“At the end of the year, you never know where you will be. We know OKC is going to be right there with us. These game was definitely matter.”
With 4:20 left in the fourth quarter, Lauvergne drained a 3-pointer to cut Grizzlies’ lead to 98-96. But Gasol came back with an off-balance shot to put Memphis up by four.
Anthony Morrow buried a 3-pointer to cut deficit to 100-99. After a Conley missed shot, Lauvergne rebounded. But Memphis forward Zach Randolph stole it from him and it led to a layup.
Westbrook was fouled by Tony Allen shooting a 3-pointer. Westbrook hit all three free throws to tie the score at 103.
“I knew it was going to be a million pick-and-rolls and he came off a lot of them,” Allen said of guarding Westbrook. “He was running and gunning. I thought I did a good job for the most part, until he got cooking.”
On the next possession, Westbrook faked out his defender and buried a 3-pointer. Oklahoma City led 105-102.
But Westbrook wasn’t done. The Thunder came up with another stop and he hit another dagger 3-pointer to put Oklahoma City up 108-102 with 1:25 left.
The Grizzlies couldn’t respond on the other end and Westbrook closed out the night at the free throw line as the Thunder fans chanted MVP.
“It’s a blessing,” Westbrook said. “I am very thankful to be here in Oklahoma City playing for these fans and playing the game I love.”
Even though Westbrook struggled with his shot to start the game, he was only three rebounds and two assists from a triple-double in the first half.
It was the rest of the Oklahoma City lineup that picked up the slack in scoring. The combination of Andre Roberson, Morrow, Adams and Lauvergne combined for 33 points on 14-of-18 shooting in the first half as the Thunder led 58-48.
In the third quarter, it was the Grizzlies’ turn to put forth a balanced attack. Led by Gasol, Conley and Chandler Parsons, Memphis went on a run to get back into the game. They led 82-80 heading into the fourth quarter.
As stellar of a defender as Adams is, he had no answer for Gasol. With Gasol’s ability to knock down step back jumpers and pass out of the post, Adams was at his mercy in second half.
But it wasn’t enough to slow down Westbrook once he got going.
“You just have to keep defending him and make him take and make tough shots,” Conley said. “Honestly, I thought we made him take tough shots. He just made a lot of them. That’s just what he does.”

Michael Kinney is a freelance writer with Eyeamtruth.com