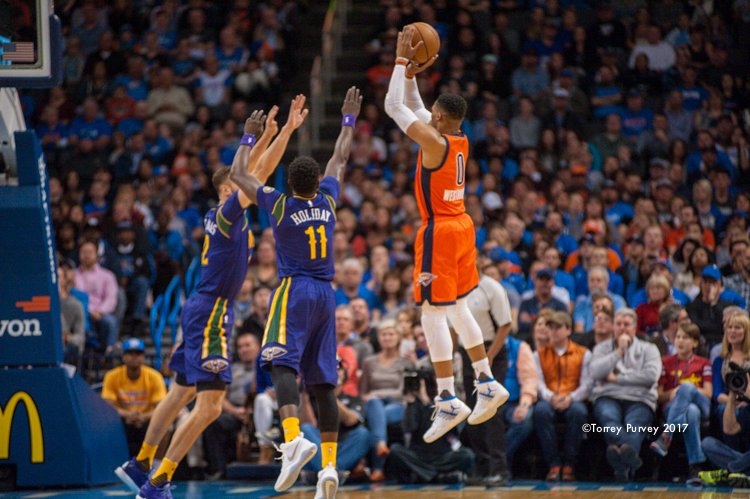 OKLAHOMA CITY — For the majority of his career, Russell Westbrook was not seen as a closer. Whenever that term would pop up around NBA circles, it was always assigned to his former Oklahoma City teammate Kevin Durant.
But with Durant gone, it has allowed and forced Westbrook to become the closer the Thunder need.
Westbrook showed off his closing skills Sunday when he posted a personal-best 21 fourth-quarter points in a win over New Orleans.
Even though Westbrook’s teammates have seen this type of clutch performances from him before, it still leaves them in awe.
“It is amazing. What he does, he doesn’t take the day off,” Thunder center Enes Kanter said. “He goes hard every night. He is just having fun. That is the most important thing. Like I said before, he helps everyone else around him, and he is doing all these triple-doubles on a winning team. That is the most important thing..
Westbrook will try to continue his late-game success when the Thunder host the Utah Jazz on Tuesday in a game that is pivotal for playoff position.
Westbrook is second in the NBA this season in points scored in clutch time, which consists of the last five minutes of the fourth quarter or overtime when neither team is ahead by more than five points. His 175 points is seven behind Boston’s Isaiah Thomas.
Thunder coach Billy Donovan said Westbrook’s ability to close out games should not be a surprise to anyone who has watched him.
“Last year, the thing I appreciated and respected out of him, is coming in these close games, 82 games with playoff games, and at least a couple handful coming down to the last minute and 10 seconds, never once did he say to me, ‘Give me the ball. I want it.’ Never,” Donovan said. “He always does what’s best for the team and I think he knows with the way our team was structured this was going to be an important part. I think he has prepared himself for this more than anything else. It’s a real testament to him as it relates to his work ethic, his focus, wanting to win and then doing whatever is asked of him to help the team win. You know that to me as a coach, I have a great admiration for that.”
The biggest closing act for Westbrook would be to help the Thunder (34-25) catch the Utah Jazz (37-22) in the final quarter of the season. Heading into Tuesday night’s matchup at the Chesapeake Energy Arena, Utah holds a three-game lead over Oklahoma City in the Northwest Division.
However, the Jazz haven’t made it easy to be caught. They are 7-3 in their last 10 games and have amassed a 17-11 road record on the season.
“I think we’ve been focused on the road,” Utah forward Derrick Favors told the Salt Lake Tribune. “We’ve played some good teams and have had some important games on the road. We’ve stuck to the game plan and not worried about the crowd noise and things we can’t control. We’ve come out and we’ve been ready to play. And the coaches have done a good job of preparing us.”
The Jazz will not know which lineup they will see until shortly before game time. Thunder guard Victory Oladipo practiced Monday after missing the past two games due to back spasms. Donovan said he will know more about Oladipo’s status after Tuesday’s shootaround.
Utah and Oklahoma City have faced off twice this season and have split the two games. The latter was a 97-95 loss for the Jazz, who played without Rodney Hood. He will be in uniform this time around.
Both earlier games were played in Utah and took place before the trade that brought Taj Gibson and Doug McDermott to the Thunder.
“It’s tough for other teams,” Westbrook said. “I think we’re playing to our potential on both sides of the ball.”

Michael Kinney is a Freelance Writer with Eyeamtruth.com