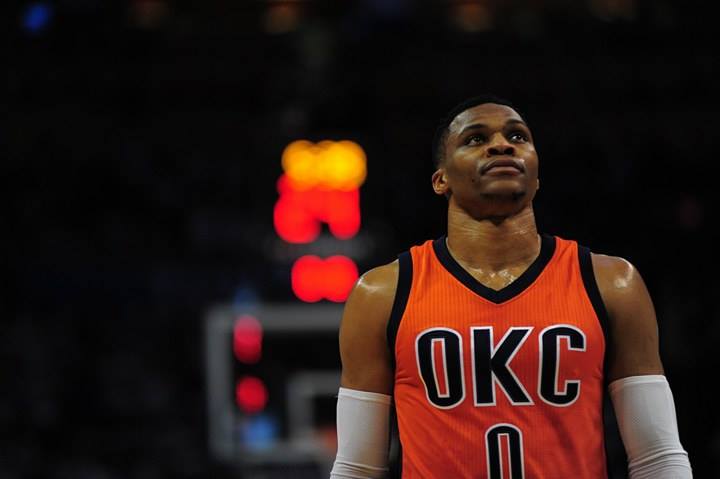 Standing in front of his Oklahoma City teammates, Russell Westbrook teared up. The normally hard edged point guard couldn’t help but get emotional late Monday night as he thought about the people who had gotten him to this point.

Westbrook was named the winner of the Maurice Podoloff Trophy as the 2016-17 Kia NBA Most Valuable Player. The award was presented to him by commissioner Adam Silver at the end of the first-ever NBA Awards Show in New York City.

Westbrook thanked the Thunder organization, his teammates and the fans. But it was when he got to his family that the water works started flowing. He talked about his younger brother being his hero, his parents sacrificing for him and his wife and new son being his life.

“As for emotions, man, my family, that’s who I play for,” Westbrook said. “Every night, you guys see me scream, pound my chest, whatever, I do whatever it is. Emotion, it’s for my family because they sacrifice so much for me at every level that I know that they do, and I’m just so thankful to have them in my life and definitely to have them here tonight.”

While many thought it was going to be tight race, with the season Westbrook had it made it almost impossible for him not to earn the award.

Westbrook joined Oscar Roberson as the only player in NBA history to average a triple-double. Westbrook registered a league-best 31.6 points, 10.7 rebounds (10th in the NBA), 10.4 assists (third in the NBA) and 1.63 steals in 34.6 minutes per game.  Westbrook also established a new NBA record with 42 triple-doubles.

“Means a lot. Oscar, guys like him, Magic Johnson, those guys. Obviously I wasn’t able to see those guys play, but just to look back at history and see the things that they did, it’s something that I looked up to as a kid,” Westbrook said. “I never thought I would be able to say that I broke Oscar Robertson’s record, and that’s just a true blessing. He came down to Oklahoma City and gave me an award, which I was truly, truly thankful for, and then coming down and doing that.”

Westbrook’s dreams of being an MVP go back to his days as a kid growing up in California.

“It’s amazing. Something I can never imagine,” Westbrook said. “I remember growing up just being home, playing the video games and stuff with my Pops, and my mom sitting there and my brother and just talking about maybe one day I could be the MVP. Obviously I was joking at the time. But now to be standing here with this trophy next to me is a true blessing, man, and it’s an unbelievable feeling, something that I can never imagine.”

While the award show itself was a dud, Westbrook’s acceptance speech was one of the few bright lights. It may be the first time in his entire pro career that he allowed those outside his family to see him in such a happy emotional state.

Westbrook was asked about his childhood friend Khelcey Barrs and what he would be thinking seeing the MVP go to Westbrook if he had not passed away during a pickup game from an undiagnosed enlarged heart in 2004 at the age of 16.

“Oh, man, he would be so proud of me. These are conversations that me and Khelcey had growing up, man, and to be able to do this in his name, everything I do, I play in his name, and I constantly keep doing that; play for his life, his family and he’s definitely looking down upon me and very, very proud of me. So I know that I’m in the right spot and doing the right thing.”

Michael Kinney is a Freelance Content writer with Eyeamtruth.com