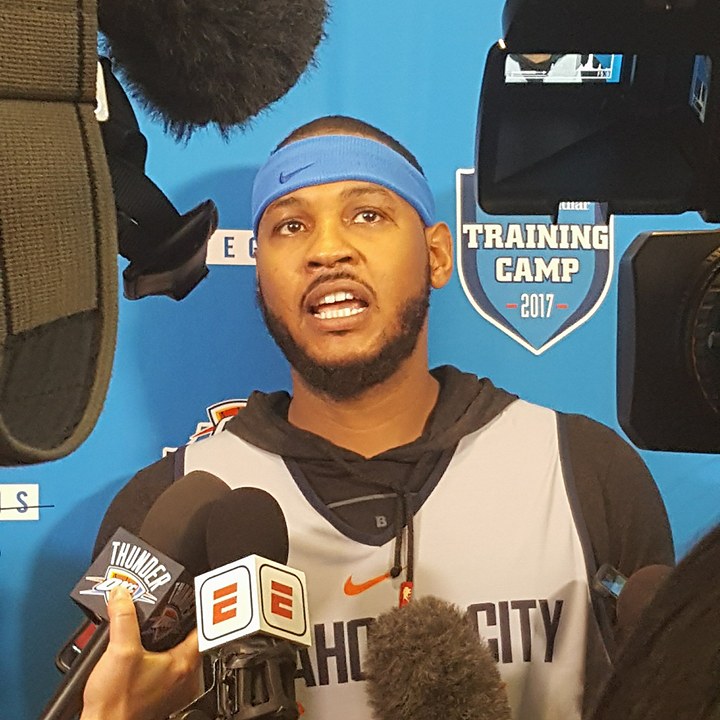 One of the questions that surrounded the Thunder after acquiring the likes of Paul George and Carmelo Anthony was what positions they would play. Both have had to play both the small forward and power forward in recent years.

But in order to make the best use of the lineup, one of them was going to have to get major minutes at the four.

The answer came the first day of training camp when Billy Donovan said Anthony would be the starting four. Anthony co-signed on the move right away.

The move gives the Thunder a possible starting lineup of Russell Westbrook and Andre Robertson in the back court with George and Anthony at the forwards spots and Steven Adams at center.

This will not be Anthony’s first foray at playing power forward. In his early year in Denver, he often found himself closer to the basket guarding bigger players. He also played most of 2012-14 at the four while in New York.

However, the perception for most of Anthony’s career has been that he wanted nothing to do with the position. That seems to have changed.

“I have no problem with playing the four,” Anthony said. “None at all. I actually like that. I actually embrace that. I think for this team it would be better for me to play the four and more beneficial to everybody.”

Paul George has only been with the Oklahoma City Thunder since the first week of July. However, in that time, the former Indiana Pacer has tried to get out into the community.

So far, George has been impressed with his new surroundings.

“Unbelievable people,” new Thunder forward Paul George said. “Unbelievable as far as the fan support. Being out downtown, being out in the city in general, The love here, the excitement, I haven’t felt this, honestly.”

Oklahoma City fans will get their first viewing of the new-look Thunder Sunday. The team has announced it’s 10th annual Blue and White Scrimmage will be held at 2 p.m. in the Edmond North High gymnasium.

In the past the event has been held at local Oklahoma schools such as Yukon, Westmoore, Bixby, Newcastle and Midwest City. But this is the first year it has been held in the Edmond area.

“We are extremely proud to tip off our 10th season with this great community tradition, and we’re grateful to the Edmond North community for hosting us,” said Brian Byrnes, senior vice president of Sales and Marketing for the Thunder. “We’ve played the Blue and White Scrimmage in a different location every year to show our fans across Oklahoma how deeply we appreciate their support and how much we value the connection they feel with our team.”

While it is a public event, tickets for the scrimmage are being passed out by the Edmond North High School officials. They will determine who gets into the scrimmage.

However, the team will also be hosting a Thunder Alley on the grounds of ENHS. That is free to the public.

One thought on “Thunder notebook: Melo’s move to the 4 opens up OKC lineup”