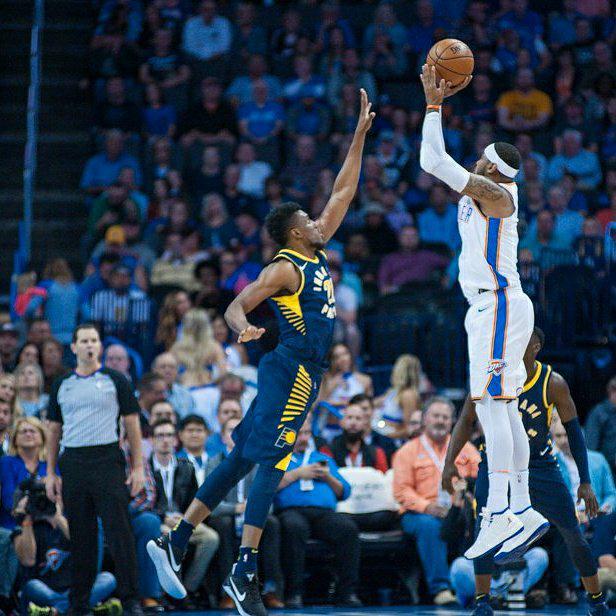 Coach Billy Donovan said it was going to be a process. Even before his Oklahoma City Thunder lost two of their first three games, the third year coach knew his squad was going to having growing pains as they learned to play together.

All it took to end the losing streak was a Russell Westbrook triple double a strong shooting night from Carmelo Anthony as Thunder (2-2) prevailed 114-96.

Westbrook posted 28 points on 10-of-18 shooting to go with 10 rebounds and 16 assists. It was his second triple double of the season.

“The floor general,” Paul George described Westbrook. “He pushed the tempo, made the easy for everybody. Got himself going. He made the plays. He was the engine tonight.”

Anthony carried the Thunder early and ended the night with 28 points and 10 rebounds. Steven Adams added 17 points and 11 rebounds.

For the Pacers, it was Victor Oladipo who seemed to be the only player ready to play. In his first game in Oklahoma City since being traded over the off season, he led all scores with 35 points.

“I thought we did a good job of setting the tone defensively,” Westbrook said.

The only member of the Thunder Big 3 not get his game going was George as the former Pacer continues his early season struggles. He scored 10 points before fouling out after only 19 minutes of action.

But unlike his time in Indiana, George was playing along side players who can also carries teams

“I think that’s why we all committed to this journey, committed to this team, because of nights like this” Anthony said. “Even though one of our big pieces didn’t have a great game tonight, we had other guys step up, so we didn’t have to rely on him as much as in maybe other games. That’s the beauty of us coming together as we have on a team like this where on any given night we’re all going to have bad nights, off nights, but other guys can step up.”

One of the biggest differences from the last two contests was the work the Thunder put in on the backboards. They won the rebounding battle 49-41. That was something they were unable to do in the two defeats.

“It was really important,” George said. “It’s something we’ve been trying to do here while playing so small. It translated. It carried over from what we’ve been preaching.”

Maybe the only part of the game Westbrook struggled in was his free throw shooing. He shot 6 of 10 from the line.

Westbrook has already missed 12 shots from the charity stripe this season. It’s something he admits he needs to work on.

“I have to concentrate, I have to change my routine up,” Westbrook said. “I usually shoot it and walk back behind the three(point line), and I’m not allowed to do that because of this new rule. I’ve been doing that since high school. So, just got to figure it out, find a different routine where I can take some time, take a deep breath. Just figure it out.”

Michael Kinney is a Freelance Content Writer at Eyeamtruth.com. Photo by Torrey Purvey.