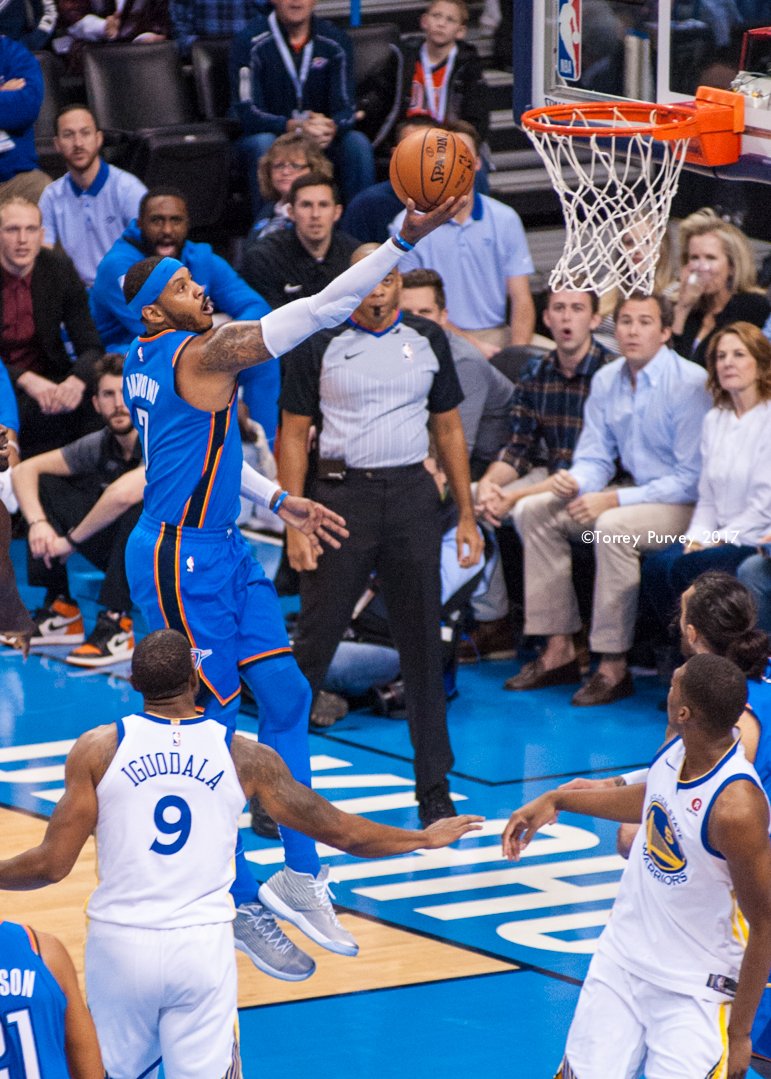 For the past two seasons, the Golden State Warriors have tormented the Oklahoma City Thunder. In 2016 it was the Warriors who knocked the Thunder out of the postseason before snatching Kevin Durant off their roster. Last season, Golden State swept Oklahoma City in three highly charged contests that all ended in blowout victories.

Even after the Thunder added Paul George and Carmelo Anthony in the offseason, very few believed they could mount a serious challenge to the Warriors. And the way they played through 16 games, they seemed to confirmed that theory.

But at some point, if Oklahoma City was going to be taken seriously, they had to make a stand. They had to play up to their potential.

If it was going to happen, it might as well have been against their tormentors. Golden State came into town Wednesday looking to continue their dominance over Oklahoma City and the Thunder had other ideas as they rolled over the defending champions 108-91.

“It just us making up our minds that we’re not losing no more,” said Oklahoma City’s Raymond Felton. “We’re going to come out here and give it everything we got for 48 minutes. Once we put our mind to do that, once we play the way we played tonight, I think things will go up for it. So hopefully this right here starts a run for us. Can’t go backward from this.”

In the days leading up to the game, the Thunder tried to act like the game had no other significance than just being the next one on the schedule. No matter how many times Russell Westbrook, Steven Adams or coach Billy Donovan were asked, they said playing the Warriors was just another game.

However, late in the second quarter, it became obvious none of that was true as they showed the entire nation that these two teams are not fond of each other. Westbrook, Kevin Durant and the Warriors bench got into a shoving match with lots of barking in between. It seemed to be especially heated between Westbrook and Durant.

However, even after the show Westbrook put on (34 points, 10 rebounds, 9 assists), he asserts there was nothing different about the game.

“This is how I play every night,” Westbrook said. “Whether it’s against Kevin, whether it’s against Detroit, Reggie Jackson, Dennis Smith on Saturday, it doesn’t matter who it is. On the court, I don’t got no friends. Only friend I have is the basketball and obviously my teammates. I go out to compete, I play at a high level like I’ve been saying since day one. That’s what I do.”

Regardless, it’s that type of intensity Oklahoma City fans have been looking from the Thunder for the past month. While the team has been trying ‘to put things together,’ the fans just wanted to see some fight from them for 48 minutes.

The fire and emotions Oklahoma City played with Wednesday night could have only been brought by a team like the Warriors. One that has the hardware Oklahoma City wants and the player Oklahoma City used to have.

Wednesday night was the first taste of the conterminous rivalry for George and Anthony. And they responded to the moment. Along with Westbrook, the trio combined for 76 points, 26 rebounds and nine steals.

“It was fun,” George said. “It’s going to be like this every time, whether we are here or there. It was fun, the intensity was great. I thought we played up to expectations.”

It was the first time in 17 games that Westbrook, George and Anthony looked like more than individuals playing one-on-one ball. They actually looked like a group who collectively decided to accept the challenge of stopping the bully who had taken their money for the past two seasons.

“It felt good,” Anthony said. “Just to be a part of that. I know the history, but I don’t really know the rivalry, But it feels good to be on this side of it. Coming back from the East Coast where rivalries are everything, you know what that’s about. So tonight it felt good to get out there and get this win against a great team, playing on our own court.”

Unfortunately for the Thunder, they can’t play the Warriors every single game this season. They have to find a way to bring the same defensive effort, ball movement, passion and fight every time they take the floor. If the Thunder go out and lose to Detroit Friday, then this win means nothing.

As for now, for one night, Oklahoma City showed they are a team that has to be reckoned with.