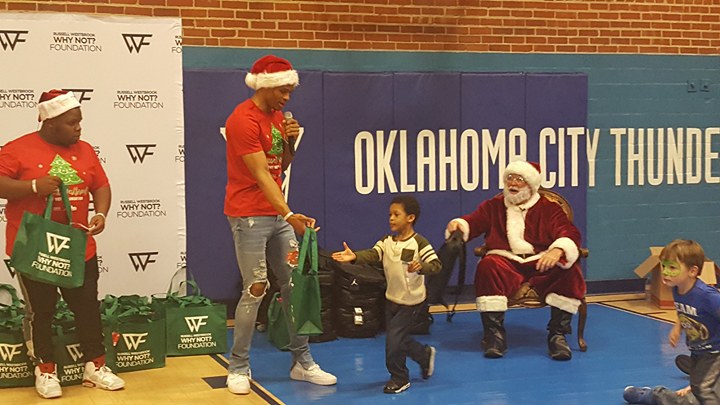 OKLAHOMA CITY– For most people, their only impression of Russell Westbrook comes from his demeanor on the basketball court. The Oklahoma City Thunder point guard usually has a snarl on his face and in attack mode. It leaves many fans to believe he is in a constant agitated mood.

However, there is a time that it’s almost impossible to wipe a smile off his face. That’s when he is giving back to the community, especially to young boys and girls.

That’s why Westbrook, his Why Not? Foundation and Jordan Brand host the City Rescue Mission Christmas Party every year for kids who ordinarily would get nothing during the holidays.

“This is how I was raised,” Westbrook said. “You have to give back regardless of how much you have. You always give back. I’ve been seeing my parents, my family, people I know giving back since we were younger. My mom and dad always gave back as much as possible. Especially now, in today’s society, you have to find ways to give back and help people any way you can.”

This year party was held Tuesday afternoon at the City Rescue Mission in downtown Oklahoma City. The mission works with thousands of homeless each year through its emergency shelter to eliminate barriers to safe, affordable housing.

A number of families were invited to attend the party that included a DJ, face painting, crafts, a bouncy castle and Armadillo races.

But the two biggest attractions were Santa Claus and Westbrook, who wanted to give as many kids individual attention as possible.

Westbrook gave each child a new pair of Jordan sneakers and a backpack. He then proceeded to help the younger kids put on their new shoes.

“I think the more intimate the event is, the better,” Westbrook said. “Obviously I could do a really big event. It gives kids an opportunity to talk, to say whatever they want to say to me. Seeing them smile, put on a pair of shoes. There is nothing putting on a pair of shoes, getting a backpack and having a party like this.”

This is the 6th year in a row Westbrook has held the Christmas party. It has become a mainstay of yearly community efforts in Oklahoma City.

“I just try to find ways to keep obviously expanding, but at the same time I want to keep it intimate,” Westbrook said. “I like to impact people as much as possible, as many people as possible. But you have to find ways to do it in a small group. Maybe two or three Christmas parties instead of one. But I will find ways for kids to be impacted.”

Westbrook, who has a young son, wants him to know why giving back to the community is a must when he gets older.

“That’s how my family raised me,” Westbrook said. “It’s very important for my family to understand that giving back is the most important thing you can do to help people out. It’s not all about money. You can do whatever it is that people need. Giving back on normal days. Not just holidays.”