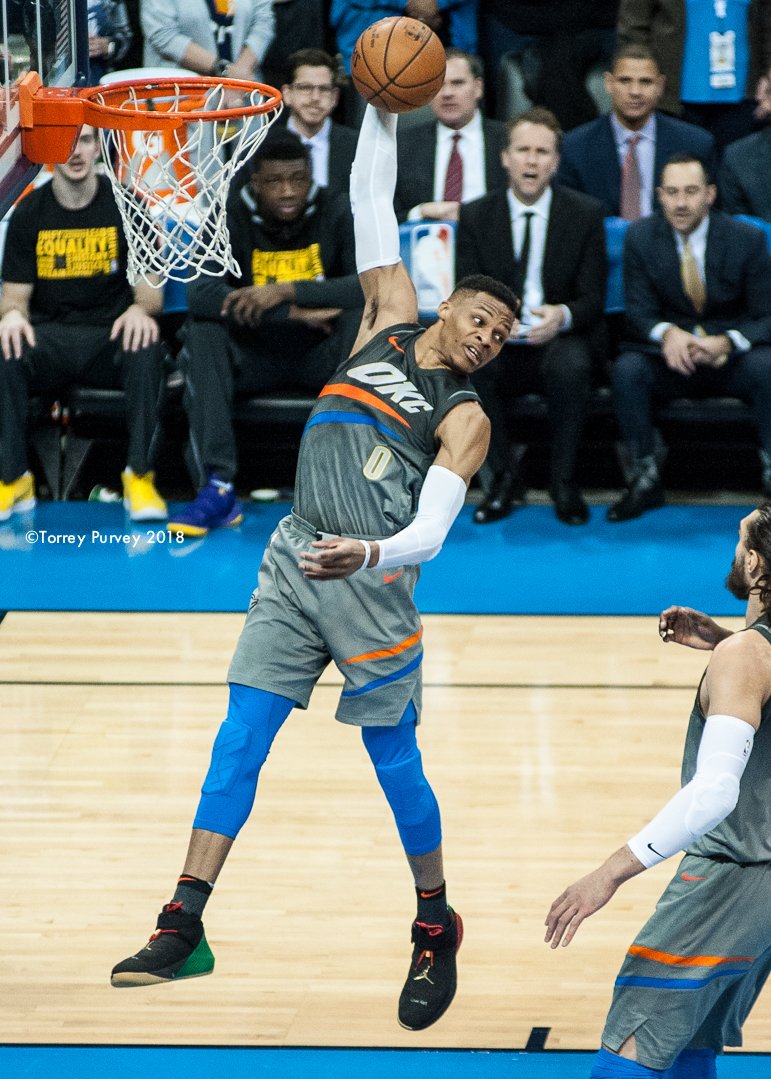 OKLAHOMA CITY- While most of the sports-watching world was preparing to watch the Super Bowl, the Oklahoma City Thunder were busy putting the finishing touches on another bad loss.

Facing an L.A. Laker squad they had pummeled twice before, the Thunder found themselves on the losing end of a 108-104 defeat.

The loss was the fourth in a row for the Thunder (30-24), all to teams they were favored to beat.

Despite that, Russell Westbrook said now is the time he relishes being in the NBA. Anybody can show character during great times, but it’s how players respond to adversity is what interest the reigning MVP.

“We lost four in a row, that’s where we are at,” Westbrook said. “But the best part about this league is you get to play again. Adversity is great. For me personally, I love adversity. It gives you an opportunity to bring your teammates together, bring everybody together.”

But it was the youngest team in the league who made fewer mistakes at the end of the game and were able to hold off the Thunder.

“I knew coming into this game, this was going to be a really hard game, you know, especially coming off the trip to Denver,” Thunder coach Billy Donovan said. “I actually thought, in some ways, this was going to be even a harder game… early game and trip and everything else. I thought offensively we had some really good moments and obviously some bad moments and obviously, the same thing could be said defensively. I don’t think we played consistently enough on both ends of the floor. I thought our guys battled and fought and tried to find a way the last three minutes to get really back into it and made some good plays to get it close but we didn’t play well enough over the 48 minutes.”

“It was just a conscious team effort. We knew all five had to crash,” Lopez said of the team’s rebounding efforts. “We knew we were capable of getting the stops as well. We just obviously had to eliminate their second chances and we did that, and everyone contributed. Like I always say, when we get the stop and we get the rebound, we’re at our best.”

Oklahoma City’s four-game losing streak ties their longest stretch of the season. All have occurred since the season-ending injury to shooting guard Andre Roberson Jan. 27.

Roberson has been replaced in the starting lineup by rookie Terrance Ferguson. After early success during Roberson’s first injury stint, Ferguson has been unable to get on track.

“We just continue to build his confidence. He is still above average with where he is, he is doing a phenomenal job still. He is a rookie,” George said. “There are going to be some bumps and bruises and he is going to have some learning moments. We are very proud of Terrance. We are all trying to help Terrance. It is unusual, being a young guy coming off the bench, and then a guy goes down and you are starting. It has been a bit of a roller coaster in his career so far, but you have to be ready for everything. He has been a huge professional at a young age, so we will continue to work with him. We are going to persevere through it with him.”

Oklahoma City travels to Golden State Tuesday for another match up with the Warriors. The Thunder won the first encounter back in November. The way the team is currently playing, though, they could easily run the streak to five games.

But Westbrook believes the Thunder were built to overcome tough times.

“Throughout the season there is going to be a lot of ups and downs,” Westbrook said. “But we never flinch. That is the one thing about this organization, about our team, we never flinch based on what’s going on. We are always going to stay together.”