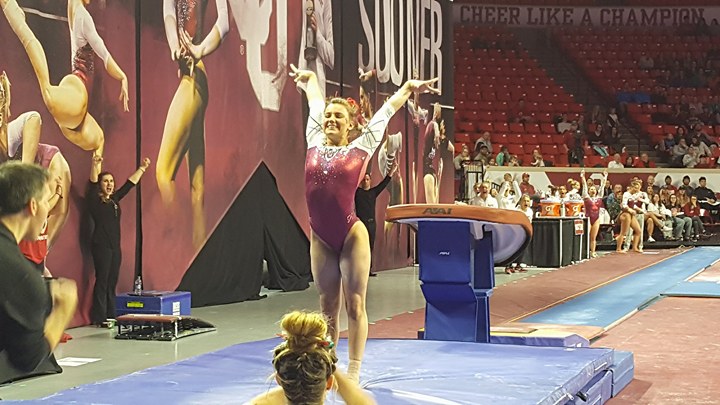 The West Virginia gymnastics team knew it had its work cut out for it. Traveling halfway across the country to take on No. 1 Oklahoma was not going to be an easy task.

In order to knock off the Sooners, the Mountaineers were not only going to have to be at their best but also get a little lucky and get an OU squad that wasn’t on top of its game.

“I think we are just building our depth right now,” OU coach K.J. Kindler said. “I think a 198 is a benchmark score, a great score. There is no doubt about it. We’re focused on showing our landings off and making sure that we are getting better and better every week. We definitely think that we are in a good place right now.”

WVU moved to 7-7 on the season. However, the Mountaineers have struggled when taking on teams ranked in the top 25, going 0-6.

“We started out a little bit rough on bars,” Doak said. “There is some work to do there. But I think as a coach you want to see them rally after some adversity.”

However, the Sooners’ 49.550 on the vault gave them a solid lead after the first rotation.

WVU came back strong on the vault. Led by Kirah Koshinski, who is ranked 11th in the nation on the vault, they totaled a season-high 49.325. Koshinski had a team-high score of 9.950 while Robyn Bernard added a 9.925.

“We struggled a little bit on bars, but we really brought it back on vault,” Koshinski said. “It was such a confidence booster. Once we got it going there, energy started to pick up a little bit.”

In its previous outing, WVU also trailed after the first two rotations before storming back to win the meet.

WVU went to the floor routine and saw its first three competitors all score around 9.7.

However, Chloe Cluchey, Tun and Koshinski each scored a 9.850 to close out the set and help the Mountaineers post a 49.100.

The Mountaineers closed out the evening on the balance beam. Despite Carly Galpin racking up 9.875, they were unable to gain any ground on the Sooners.

All but one member of the Oklahoma floor unit scored at least a 9.8. Maggie Nichols led the way with a 9.950 on her way to securing the all-around title for the Sooners.

Oklahoma is off until March 3 when they host Big 10 powerhouse Michigan at Lloyd Noble Center. OU is hoping to bring out a great crowd for the meet.

“The crowd tonight was really good,” Oklahoma’s Natalie Brown said. “We feed off the energy. We want everyone in Norman to come out to our meets because we work really hard in the gym and we want to show them what we’ve been doing. We’re the number one ranked team so that should be the reason they should come out and watch us.”