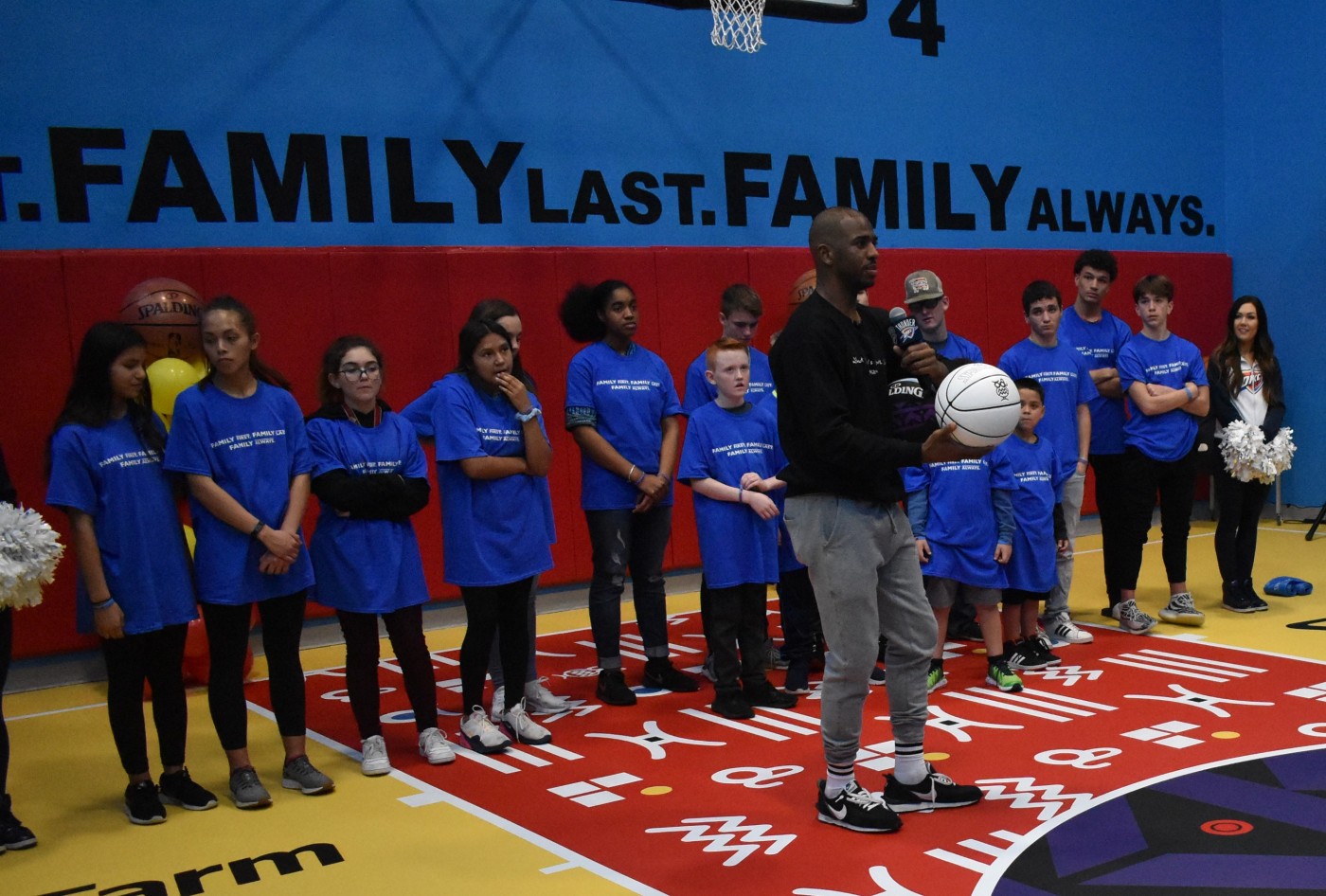 The staff at the Family T.R.E.E. in Oklahoma City has a tough job. The children who show up the facility have had to live with unimaginable pain and sufferings and it’s up to the staff workers to help them.

Family T.R.E.E., which is part of the Department of Human Services, is designed as a transformative space for hope, strength and positive change to take root. In this space, families involved with the Child Welfare System are supported through Team, Resources, Evaluation and Education (T.R.E.E.), all purposefully dedicated to renewing and reunifying their family.

Oklahoma City Thunder point guard Chris Paul decided to give them a little help recently when he spearheaded a charge to refurbish a nearly 30-year old basketball court at the Family T.R.E.E. that will be used to benefit victims of child abuse and child neglect.

“This building serves kids on some of their darkest days,” said Justin Brown, Director of the Oklahoma Department of Human Services. “For them to have a space like what Chris Paul dedicated today, it’s sort of a fray of light in what sometimes can be a very dark time in their lives.”

The refurbishment was completed in partnership with the Chris Paul Family Foundation, Spalding and State Farm. Along with Paul and Brown, Jack Marquardt, Spalding, Vice President of Brand Communications also delivered a message to the two dozen kids and family members on hand for the unveiling Jan. 10.

“I’ve always had a unique perspective to think back to when I was a kid sitting in those seats and I always look and picture my kids to,” Paul said. “When you’re a kid, your attention span is not very long. Just understand that they just want somewhere to be able to play, a safe haven. And that’s what kids should have.”

The basketball court will be another tool for Family T.R.E.E. and the Department of Human Services as they look to help children in difficult situations.

“We serve a million people in the state of Oklahoma with 6,000 employees. We cannot do this alone.,” Brown said of DHS. “So partnerships with people like Chris Paul and organizations like Spaulding are critically important for us being able to serve our community in the best way. It is truly reflective of what this place is. It’s a place of collaboration and service. That’s what Chris personifies.”

Brown also didn’t forget the main reason for refurbishing the court, which is to help children and their families.

“We serve kids all across the state. We investigate 81,000 cases of abuse every year. Some 240 kids a day are reported potential abuse claims,” Brown said. “So we investigate all those. And this facility here is to reunite families by providing space for them to be together, to work with counselors and really work with therapists to understand how to interact in better ways as they potentially leave our system and we reunite families.”

The court was designed by Paul and his 10-year old son. Surrounding by a variety of bright and illuminating colors, the floor features astrology symbols for Gemini, Aquarius, Taurus and Leo, which belong to each member of Paul’s family.

Paul explained the significance of the design element that went into the court. And gave a brief history of how he first came to Oklahoma City when as a member of the New Orleans Hornets, Hurricane Katrina forced them to find a new home as a rookie.

The walls are also adorned with the names and numbers of Rasual Butler and Jackson Vroman, both of whom were teammates of Paul during his first stint in Oklahoma City. Butler and Vroman passed away in recent years and Paul wanted to honor them.

“Those two guys played with me here in Oklahoma,” Paul said. “I felt it would be fitting to put Jackson and Rasual up there. In this league sometimes you play with a guy for a few months, maybe a few years. I played with Rasual for I think six years. Rasual is like a brother to me.”