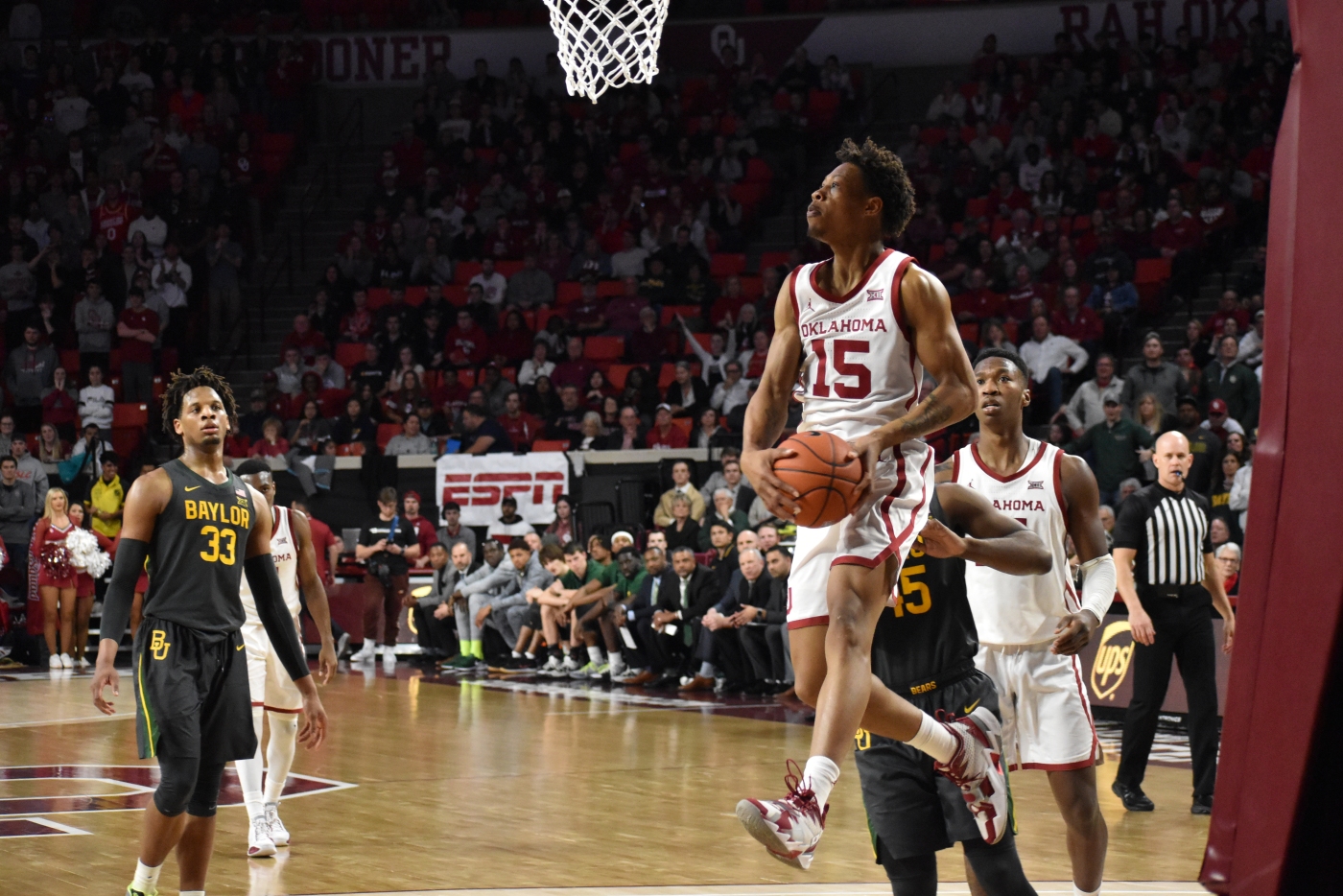 NORMAN –  Over the course of three days, Oklahoma had a chance to make a serious statement. Facing a pair of top five teams in back to back games, it was their opportunity to show the country and themselves that they can be a dangerous team in the NCAA tournament.

However, that was not what happened. After losing by 17 to No. 3 Kansas Saturday, they fell 65-54 to No. 1 Baylor Monday at Lloyd Noble Center.

Oklahoma dropped to 16-10 overall and 6-7 in the Big 12. The loss was only their second at home this season.

For Baylor, they remain undefeated in the Big 12 at 13-0. They have now won 23 games in a row and had into a matchup with Kansas on Saturday.

Oklahoma started the night knocking down shots from the perimeter. It allowed them to take a one-point lead early in the contests.

However, when they went cold, Baylor took advantage. They surged ahead by 11 with under five minutes left I the first half.

With 2:20 left, Brady Manek drained a 3-pointer from the top of the key to cut the lead down to 28-22.  Austin Reaves then threw an alley-oop to Manek and the Sooners were within four.

Baylor’s Matthew Mayer scored right before the half ended to give the Bears a 30-24 lead going into the locker room.

The Sooners picked up their defensive intensity to start the second half. Kristian Doolittle and Kur Kuath controlled the paint and forced the Bears Into difficult shot or blocked them outright.

Doolittle also did most of the heavy lifting scoring-wise. After being held to three points in the first half, he began to collect buckets and trips to the free-throw line.

However, that is when Baylor decided to turn things around. They outscored Oklahoma 13-2 over the next four minutes to take a 12 point advantage.

Even though Oklahoma had put Baylor in foul trouble and were shooting free throws on each foul from the nine-minute mark on, they kept on throwing up 3-pointers.

With 2:33 left in the game, Oklahoma trailed 63- 54. They needed a stop if they were going to climb back into the contest. However, Jamal Bieniemy fouled Jared Butler. He missed his free throw attempt, giving the Sooners a chance.

Unfortunately for Oklahoma, Manek missed a contested 3-point attempt and Baylor got the rebound. That sent the crowd to the exits and signaled the end of the night.

Baylor edged out Oklahoma on the boards 37-35 and only had two fewer assists. The Sooners also made six more free throws.

However, Oklahoma’s lack of 3-point shooting prowess killed them. They made only five of 21 from behind the arc.

Butler led all scorers with 22 points on 8 of 20 shooting. Mark Vital added 10 points for the Bears.

Doolittle paced the Sooners with 18 points, 10 rebounds and three blocked shots. Alondes Williams added 11 points in 19 minutes while Manek posted 10 points. However, he scored only one point after halftime.