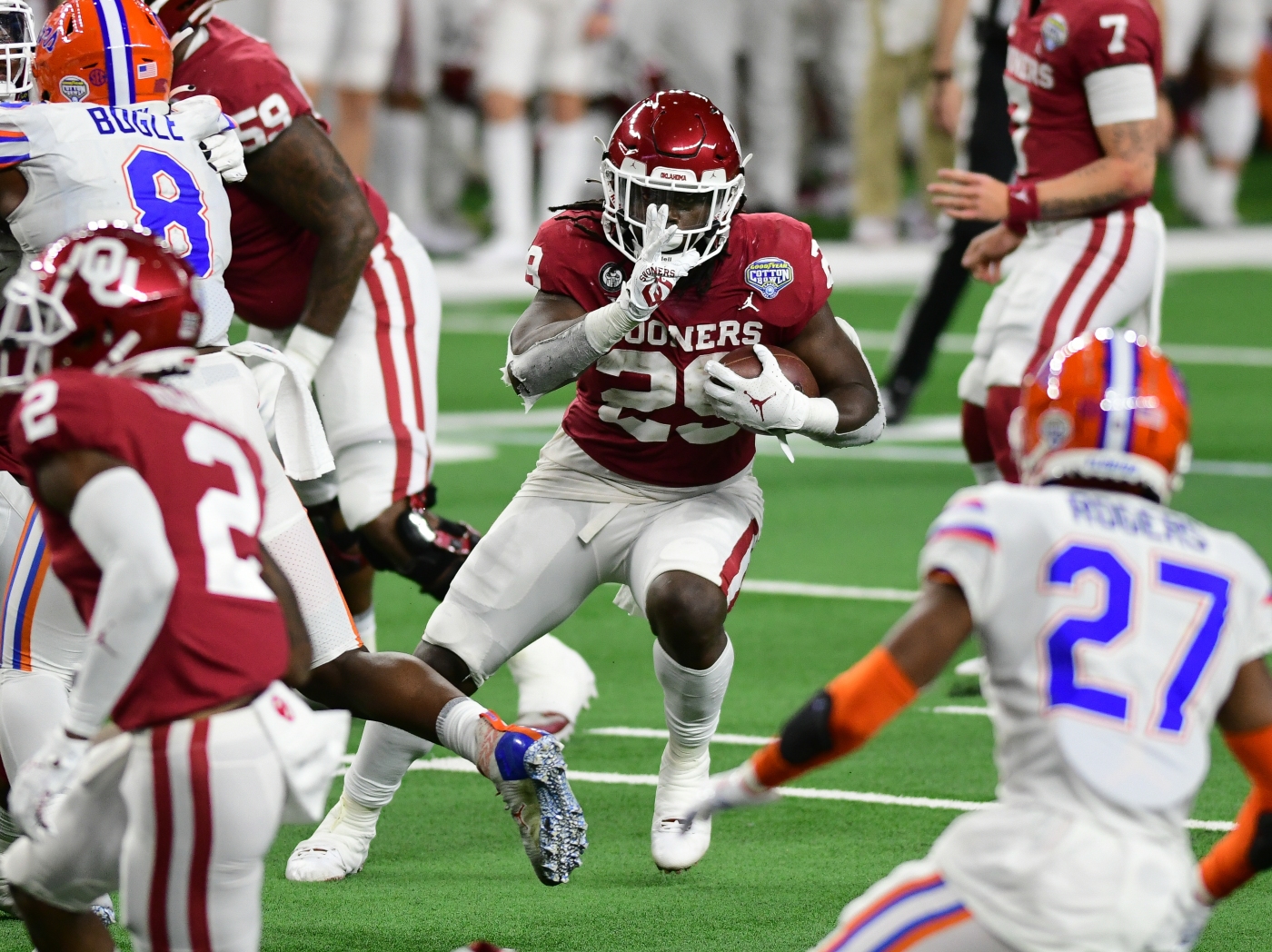 There was nothing easy about the 2020 season for Oklahoma. From key players sitting out the year to its 1-2 start to battling COVID-19 throughout, it was a year unlike any other coach Lincoln Riley and his players had ever been through.

The season came to an end Dec. 30 when the sixth-ranked Sooners faced No. 7 Florida in the Cotton Bowl in Arlington. It was supposed to be one of the better matchups of the bowl season and a nice reward for the players and fans who endured the rollercoaster ride of the year.

However, it turned into a one-sided affair and litany of excuses that left a bad taste in the mouths of players and fans.

The Sooners rolled over Florida 55-20 to win the Cotton Bowl. It was not only the team’s highest-scoring game of the season, but it was the most points scored in program history. The 35-point victory margin tied the school’s bowl game record.

For Riley, the win was a testament to the perseverance of his squad.

“We came here and decided we were going to be a team on a mission,” Riley said. “We were going to finish, no matter what happened. We wanted to make a statement with the way that we played. We didn’t want that to be just a part-time statement… Let’s be sure we remember it the right way.”

Despite the resounding win by the Sooners, Florida coach Dan Mullen told anyone who would listen that Oklahoma was not in the same league as his Gators.

“With the number of people that were out for the game, we were under numbers, actually,” Mullen said. “We had the numbers to not play the game. You see a lot of games have been canceled and not played. Maybe this is wrong, (but) I viewed this game that wasn’t the 2020 football team that you saw. I mean, there were about 25 guys missing off the 2020 football team out there tonight.”

Mullen used his time with the media after the game to make sure and let everyone know that was not the real SEC-runners-up that were on the field against OU.

“I view the last game the last team, the 2020 team, played was 11 days ago,” Mullen said. “A lot of the guys that were out there playing tonight were on the scout team most of the year for us, so very few guys that were playing had even really we kept things simple.”

Florida played the contest without several players who decided to opt-out of the game instead of risking injury. That included their top three wideouts.

However, Oklahoma also had several opt-outs as well, including top-defensive back Tre Brown.

Riley refused to get pulled into a back and forth over Mullen’s comments when he was asked about them two days after the game.

“I think that’s pretty easy to say after the fact and after what happened,” Riley said. “I do have feelings on it, but I just don’t know what I have to gain, really, with sharing those, honestly. I don’t think I have a whole lot to gain. We’re going to try to appreciate the opportunities that we have here, the opportunities that we have to play. We’ve been in situations this year and in years past where we didn’t have all of our bullets either. Everybody has to make a decision on how they are going to handle that within their programs.”

Regardless, Oklahoma closed out the year with an eight-game winning streak, a sixth-straight Big 12 championship and impressive win over the SEC foe in the Cotton Bowl. It sets them up nicely for the 2021 season.

However, when they return they will be without several key players from this season who have declared for the draft. They include Brown, Tre Norwood, Creed Humphrey and Adrian Ealy.

The Sooners have also had a rash of players announce they will be entering the transfer portal and leaving OU. They include receiver Charleston Rambo, safety Robert Barnes and linebacker Jon Michael-Terry.

“Thank you Sooner Nation, Coach Stoops, Coach Riley and Coach Simmons for believing in me. Thank you OU football for the lifelong memories made,” Rambo posted on social media. “After much thought and prayer I have decided to enter the Transfer Portal. God Bless.”

While those losses could have an impact, the Sooners still return a ton of talent and currently have 13th ranked recruiting class for 2021.

One player who will be back included an experienced Spencer Rattler. The redshirt freshman quarterback got better as the season progressed and saved his best performances for last.

“After these last two games, it’s been a breath of fresh air. 2020’s out of the way. We ended up on top. This is what we worked for,” Rattler said. “We had to have fun with it. There’s no better feeling than having fun with your brother. It’s probably the most fun game I’ve ever been a part of.”