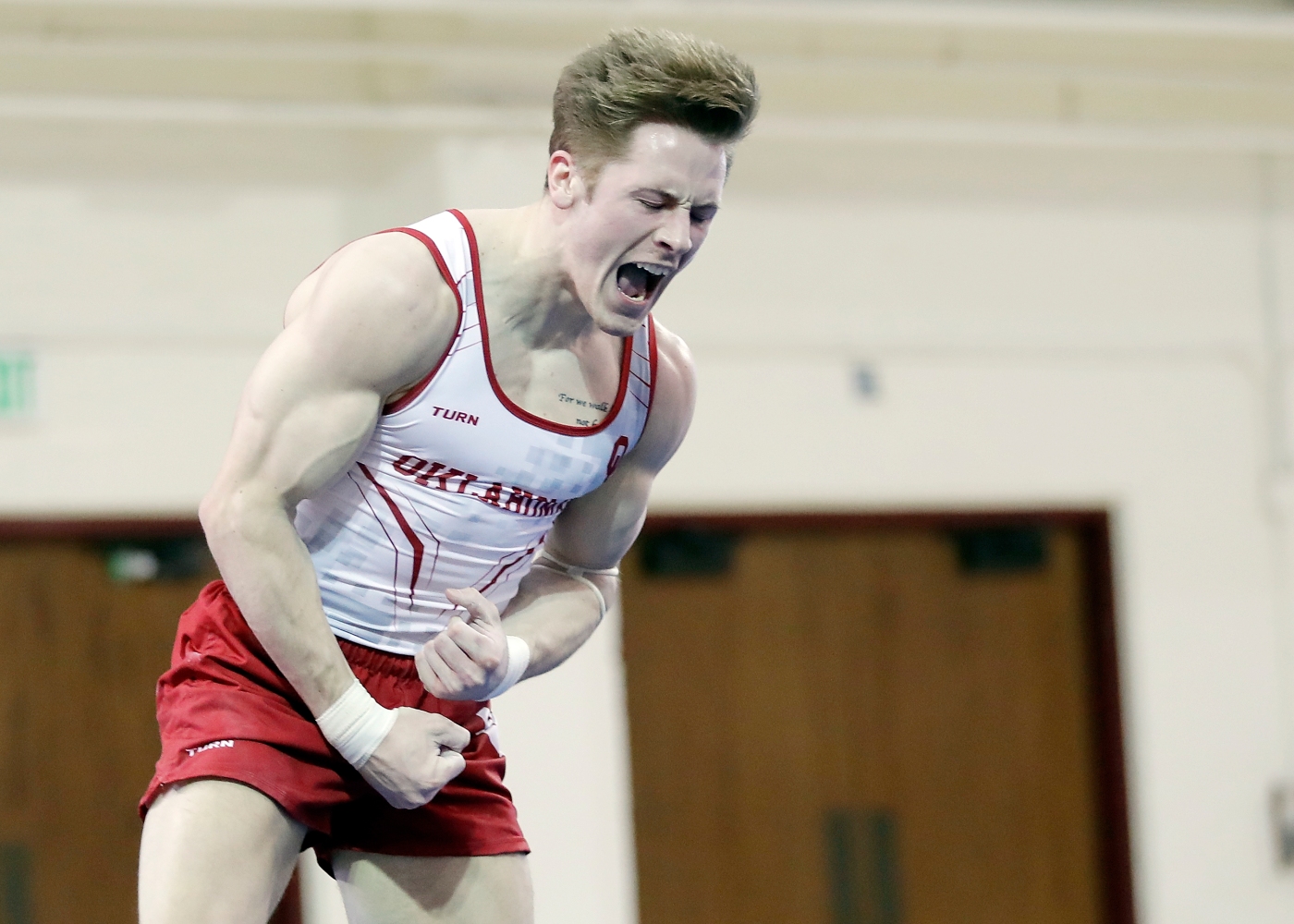 Gage Dyer said he felt like a hybrid of the Flash and Superman. It was a feeling the senior had never had during his time at The University of Oklahoma.

But when Dyer led the Sooners onto the floor at the NCAA championships April, the Yukon (Okla.) native knew just what he needed to do in order to help OU claim its men’s gymnastics title. ‘Be a superhero.’

“I took about four years to help me get back that confidence up. Both days of competition, I woke up and I was feeling dangerous,” Dyer said. “I was ready to get up and do my job. It was probably the most relaxed I’ve ever been doing a routine because I was referring back to all of my training that led up to the moment that it counted the most. I just trusted myself, trusted my gymnastics, and went out there and did my job.”

While the Sooners came up short in their quest for adding a 13th team title to their trophy case, Dyer still had one of the best outings of any gymnast at the meet. The team captain put up the top two individual career highs on the floor exercises and the vault won him a pair of individual national championships and earned him all-American status.

“Obviously, it was a good outcome,” Dyer said of his championship performance. “I’m extremely blessed. I don’t think I would want any other way to end out the year on such a high note. It was what I set out to do for my personal achievements and goals. Being able to say that I’m a floor and vault national championship, it’s a blessing for me.”

Dyer posted a career score of 15.266 on the floor, which was the highest individual score across any event throughout the 2021 NCAA season. He then came back and posted another personal best score on the vault with a 15.033.

Dyer was awarded the NCAA’s Event Specialist in both events.

“I was thrilled for him,” OU coach Mark Williams said. “Floor is all about landings and he stuck all of them. When he stuck his dismount, I knew he won it. It was his career-high and I think that it could hold up in a world championship.”

The awards kept coming after the NCAA championships were done. The biology major was recognized as the final 2021 CGA Specialist of the Week.

“I’m pretty comfortable when it comes to floor and vault, but I hit peak confidence as soon as I raised my hand to those judges,” Dyer said. “It was more of a ‘Watch what I can do. Look at all the hard work I put into this, and I’m going to put on a show for you guys’ versus just raising my hand and doing gymnastics. I was personally trying to put on a show for myself, the judges, and everyone in the crowd.”

Dyer said he took a completely different mindset into the NCAA championships. It was almost like a switch was flipped and he became a different person from a galaxy far, far away.

Dyer said winning national titles was not on his radar growing up. He didn’t even start gymnastics until he was 13 when he joined Victory Gymnastics in Norman before transferring over to Bart Conner Gymnastics Academy.

Before then he took tumbling classes.

“I did that for a few years, but then once it closed, I was off of tumbling and gymnastics in general for about a year,” Dyer said. “Then, my mom’s coworker asked me if I wanted to come in and try out gymnastics, and the rest is history.”

Dyer’s career isn’t history just yet. Even though he is a senior and has competed for four years, due to the COVID-19 pandemic, winter sports athletes got an extra year of eligibility if athletes wanted it. Dyer hasn’t announced if he will be coming back to OU next season.

Until then, Dyer does have other travel plans. That includes the U.S. National Championships June 3-6, competing to make the national team and possibly the Olympic trials.

Dyer hopes the journey he is on and his accomplishments will inspire young kids growing up in Oklahoma to go for what they want and not settle.

“I would like to say that this life goal and the dream that I had has really opened up my mind to believe that you can achieve whatever you set your mind to,” Dyer said. “I am living proof of that. I’m not trying to toot my own horn or anything. If you truly set your sights on something, you work harder every single day, and never settle for anything less than greatness, you can achieve the goals that you want to achieve.”

Story ran in The Yukon Review