Before the first game was even played, Sondra Callaway had her reservations. Even though the Lawton native has been a season ticket holder to Oklahoma football game for nearly a decade, she had planned to sit out the 2020 season due to the coronavirus pandemic.

“Because of Covid-19, my husband and I thought it was best to not attend,” Callaway said. “I don’t think there are enough precautions to keep everyone safe.”

Growing up in Lawton, Oklahoma, Marcus McNac always seemed to have a keen interest in all facets of barbeque. From the age of 10 on, he was constantly asking questions.

But unlike many of today’s up and coming chefs, he didn’t learn his craft on YouTube or a cooking school. McNac learned how to barbeque the old school way. He went with his dad to a juke joint.

Late last month NBA players stunningly boycotted postseason games last month to protests the death of unarmed black men and women at the hands of the police. At the time it seemed unorganized and rash.

To many it didn’t seem the mass sit out would accomplish much, especially after they decided to go back to work three days later and the playoffs resumed.

However, Oklahoma City guard Chris Paul, who is also the president of the NBA Players Union, hinted at the time that projects were in the works.

As the United States enters its seventh month of the Coronavirus Pandemic, public support seems to be shifting when it comes to the importance of facial coverings, according to results from a media survey in Oklahoma.

The survey asked 563 likely voters in Comanche County if they approve or disapprove of mandating the wearing of masks while in public places. While 71.4 percent (402) of those surveyed approved of the mandate, 56 percent strongly approved.

These results did not surprise Meagan Garibay, who is a Registered Nurse and Board Certified Infection Preventionist at Comanche County Memorial Hospital. She has seen a change in the attitudes concerning wearing facial coverings.

“I think that from what I’ve seen on social media, I think that the majority of people are supportive of it. I think the majority of people that don’t support it probably they don’t understand the why behind the mandate,” Garibay said. “They don’t understand the purpose of masks or how masks help protect the general population from COVID or from any other number of respiratory illnesses.”

As an Infection Preventionist, it is Garibay’s job to prevent the spread of infectious viruses and dieses to other patients and staff inside CCMH. She has been doing the job since 2015.

Garibay says swearing a mask is not really intended to protect the person from getting the virus. It protects them from giving it to others, which is why the majority of the population needs to follow the mask mandates.

“It’s actually for what we call force control. So it’s actually protecting others from you,” Garibay said. “When you talk, when you cough, when you sneeze, when you laugh, when you’ve seen things like that, all dispel respiratory droplets into the air. If somebody is in the immediate vicinity next to you, they could breathe those droplets in.”

According to the Ledger survey, 15.3 percent of the people are strongly against the mask mandate while 8.3 percent are somewhat against it.

Garibay says people who are against the mask mandate don’t believe they should be told what to do. However, when wearing facial coverings was a voluntary act, Garibay explained, a small portion of the population chose to use them.

“So, unfortunately, to protect the population in general,” Garibay said, “they chose to do the mask mandate so that more people would be protected.”

While the 71 percent approval could be seen as high, it still trails most national polls and surveys.

In late August, the PR Newswire conducted a national poll on mask mandates. Its results showed that 80 percent of those polled approve of their local and state government requiring everyone in their community to wear a mask when in public. A little more than 78 percent would approve of the federal government having a mask requirement.

The numbers would be higher is people understood exactly how masks can protect their communities from the spread of COVID-19. Bu Garibay says misinformation has caused a distrust in the information that is being put out.

That includes the science community as well.

“I think there’s also, for whatever reason, I think there’s a general distrust of maybe the scientific community right now,” Garibay said. “That’s the problem with watching science evolve in real time, like it is with COVID. What was true yesterday may not be true today just because there’s so many people doing so much research into what COVID is, what makes it tick, how we can treat it, how we can prevent it I really think that people have just decided that nobody knows what they’re talking about, so they’re not going to believe anything that anybody says.”

As the nation moves along through 2020, there are many theories on what is going to happen in the future as far as stopping the spread of COVID-19. With no available vaccine on the market or any other proven medication that can slow the effects, that leaves social distancing, washing hands and wearing facial coverings as still the top options to control the virus.

However, flu season around the corner, that could add another obstacle to the already mounting problems.

That is why Garibay is asking residents to not only continue to wear their mask, but also get a flu shot before the end of October.

“I think that there’s a lot of uncertainty around how flu season is going to go this year. I mean, flu season is always kind of unpredictable anyway,” Garibay said. “It’s just kind of a wild card scenario because we don’t know truly the impact that flu season will have with COVID going on simultaneously. So I think that that’s the question that, unfortunately, we’re just going to have to live through the flu season to see which way it goes.”

It’s not often that the United States military makes changes to its uniforms. That’s especially the case in the Army.

However, 2020 is obviously no ordinary year. In the coming days Fort Sill will be the first Army Training Center to receive the new Army Green Service Uniform (AGSU).

Drill Sergeants on base were fitted for the new uniform last week. Basic combat trainees are expected to receive the AGSU at the end of September.

“Fort Sill is excited to start seeing our drill sergeants and trainees in the Army Greens and looks forward to our entire Fort Sill formation donning the new uniform in the near future,” said Maj. Gen. Ken Kamper, Commanding General of the Fires Center of Excellence and Fort Sill.

The AGSU provides a higher quality uniform with a longer service life than the previous service uniform, according to officials from the Fires Centers of Excellence. It is expected to have a shelf life of six years, which is two years longer than the Army Service Uniform, commonly known as Dress Blues.

The new army green sergeant uniform has a historical foundation. It’s based off the service uniform worn by America’s military during World War II.

“The current configuration of the uniform really is very close to what you would have seen during the World War II era,” Annette LaFleur, design team leader told the Army News Service. “It really speaks back to that heritage and we haven’t changed that much in terms of the aesthetics of the uniform.”

According to officials, all personnel in basic combat training and one-station unit training should receive the new uniforms by April 2021.

After close to three years and 1,200 test uniforms worn by Army recruiters and 700 prototype models, the Army decided on the new apparel.

Despite the introduction of the new uniform, the Army isn’t tossing the current service uniforms into the back of the closets just yet. They will return to being a formal dress uniform, while the Army Greens will become the everyday business attire for all soldiers.

The new Army Greens are estimated to cost around $500, depending on the clothing combination.

For enlisted soldiers, their clothing allowance will help them pay for the uniforms.

Female Soldiers will have the option to wear versions with a skirt or pants, and will also have additional shoe options. An all-female board helped design the intricacies of the female AGSU.

The Army Greens will be fielded to soldiers reporting to their first units. The mandatory wear date for all soldiers will be 2028.

Vice Chief of the Army Gen. Joseph M. Martin said he has been wearing the new AGSU wherever he goes for the past year.

“As we transition to the next phase of the rollout, I’m excited for the soldiers who are about to receive the uniform,” Martin told the Army News Service. “I think that when they see themselves in the mirror they’ll feel connected to the soldiers of the past and realize that they’re writing the next chapter of what people feel about our Army.” 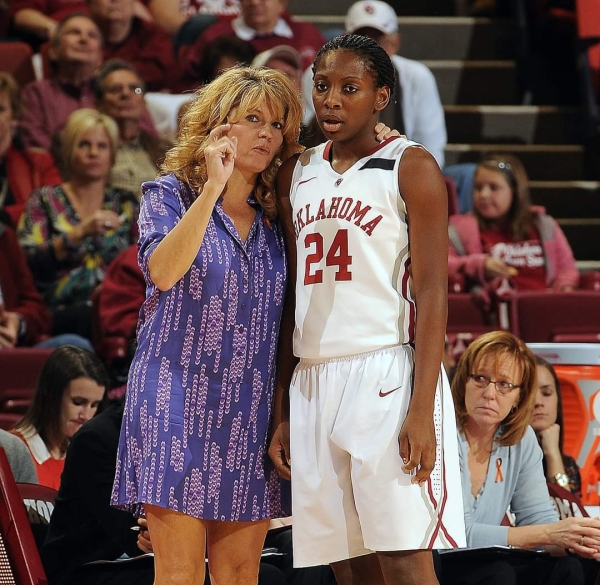 It started out as a simple social media post. Gioya Carter replied to a photo of the OU football team making its Unity Walk.

From there, the University of Oklahoma Athletic Department was put in crisis mode and longtime coach Sherri Coale now finds herself having to defend her actions off the court instead of on it.

It all started Aug. 28, when Carter posted to her Twitter account a scathing comment that took aim at Coale and her attitudes and actions towards her minority players over her career. She compared the willingness of football coach Lincoln Riley to allow his players to express themselves while Coale, according to Carter’s tweet, was on the other end of the spectrum.