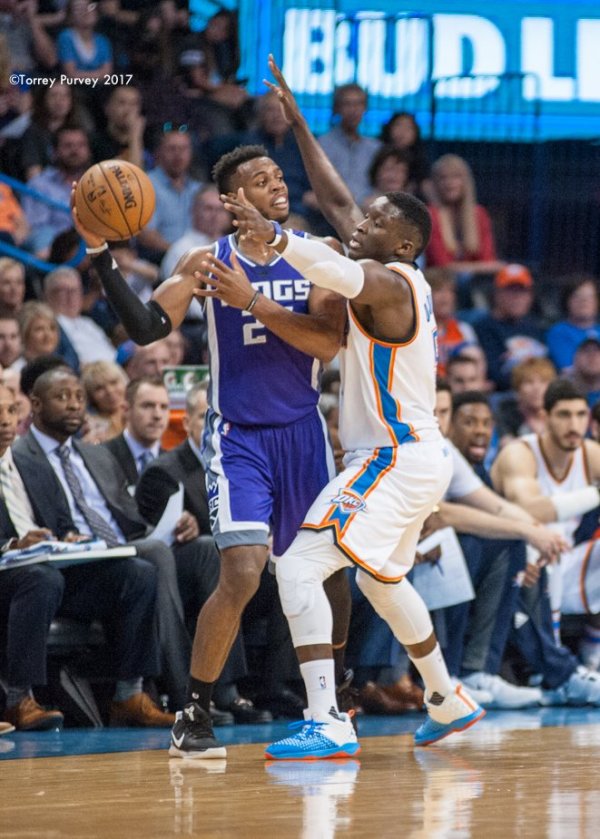 OKLAHOMA CITY — On March 7, Russell Westbrook scored a career-high 58 points for Oklahoma City. It was one of the best individual performances the NBA has seen this season.

However, the Thunder lost that game as the team stretched its skid to four games at that point.

Since then, the Thunder seemed to have turned the corner. While Westbrook is still the focal point, his teammates have found their roles and their contributions have increased.

That was the case in Oklahoma City’s 110-94 victory over Sacramento on Saturday afternoon at the Chesapeake Energy Arena.

“We know we have the talent to score the ball inside or outside,” Thunder center Enes Kanter said. “We just need to focus on the defensive end, play with an edge.”

Westbrook led all scorers with 28 points, making 9 of 20 shots from the field, and had eight rebounds and 10 assists. He was two rebounds away from his 36th triple-double of the season.

Westbrook was asked if triple-doubles ever cross his mind late in games when he’s close.

Doug McDermott came off the Thunder bench to score 21 points on 8-of-9 shooting from the floor. Steven Adams added 16 points and 13 rebounds.

Enes Kanter contributed 14 points as Oklahoma City won its fifth straight game and improved to 40-29. The Thunder are tied with the Los Angeles Clippers for fifth in the Western Conference.

Georgios Papagiannis led the Kings with 14 points and 11 boards.

“I’m in a rhythm right now. I started with 11 minutes and then started to get more, so I am just starting to get used to it because most of the time I have been playing for the D-League and when I got here the last few games it was a lot different,” Papagiannis said.

“So just every game and every practice I am trying to get used to the players because most of the time I had been in Reno and everything works right now.”

In the opening minutes of the game, the Kings looked like they might give the Thunder a fight. Led by Darren Collison, Sacramento opened a quick 10-9 advantage.

That was the last bit of hope the Kings had. The Thunder outscored them 20-9 the rest of the quarter to grab a double-digit lead.

The Oklahoma City bench continued to cause problems for Sacramento. Kanter wore out the lighter Willie Cauley-Stein in in the paint as he racked up 10 first-half points.

While Westbrook didn’t have to explode for big numbers, he made enough signature plays to leave an imprint on the game. That include draining a jumper in the final seconds of the first half to give Oklahoma City a 63-41 halftime lead.

“It’s hard to come back on a great team like that,” Hield said. “They have been playing together for a while, Russ is always great and then add the pieces of Taj Gibson and Doug McDermott, who are playing really well.

“We are a young team, so we just have to keep learning from these losses and keep getting better.”

Michael Kinney is a Freelance Writer with Eyeamtruth.com 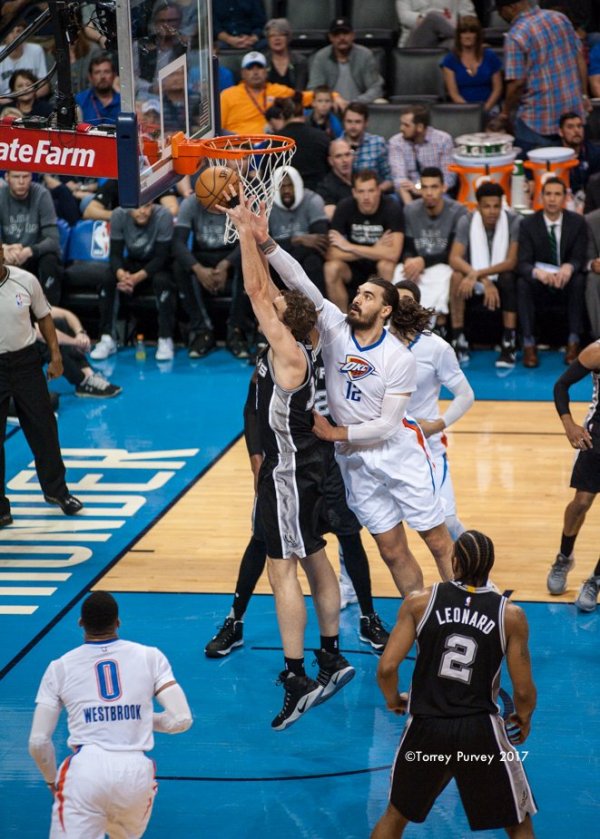 The Oklahoma City Thunder can’t seem to make up their mind. Just under two weeks ago they were mired in a four-game losing streak and seemed on the verge of seeing their season come apart.
However, since a six-point loss to Portland March 7, the Thunder have rattled off four consecutive victories, each one by bigger margins than the last.
Entering Saturday’s afternoon contest with the Sacramento Kings (27-41), Oklahoma City (39-29) finds itself just a half a game out of fifth place in the Western Conference standings. It’s an impressive move up the standings considering where they were one week into March.
One of those four wins came Thursday with a 21-point victory over Toronto in which Oklahoma City led by as much as 30 in the fourth quarter and Russell Westbrook didn’t have to leave the bench in the final 12 minutes while still picking up a triple-double.
With 14 games left in the season, Westbrook is seven triple doubles away from tying Oscar Robertson’s record for most in a season and eight away from holding the record all to himself.
Westbrook’s chase of triple doubles caused a stir on social media Thursday and Friday when Kevin Durant’s brother, Tony, sent out a tweet seemingly mocking Westbrook.
“Main man chasing the hell out these triple doubles lmao,” Tony Durant tweeted Thursday night during Oklahoma City’s game with Toronto.
This caused Westbrook’s wife, Nina, to respond with a sub-tweet Friday afternoon.
“@LifeOfTonyD35 and it seems like you are chasing the hell out of some attention. You got it,” Nina Westbrook posted.
Neither Russell Westbrook nor Kevin Durant responded to the back and forth.
Most of the credit for the Thunder surge has been given to Westbrook. He posted a triple double in each of the last four wins. Whether they have been at home or on the road, he has played at an MVP level. But his Oklahoma City teammates deserve their share of credit as well.
In its win over Toronto, seven players reached double figures in scoring. It was six in Brooklyn.
One of those who has stepped up is forward is Taj Gibson, who was traded to Oklahoma City in February. He was inserted into the starting lineup after the loss to Portland and Oklahoma City is undefeated since then.
“The biggest part I think for Taj that he has helped that first group with is Taj is a great talker, great communicator,” Thunder coach Billy Donovan said. “For a guy like Russell, Steven (Adams) and even Andre (Roberson), having Taj out there defensively, he is constantly talking. So it allows that group to collectively be on the same page.”
Buddy Hield is looking to have to same type of impact on his new team that Gibson is having.
Hield was part of the mega-trade that sent DeMarcus Cousins from Sacramento to New Orleans. In 11 games with Sacramento, Hield is averaging around 14 points
However, what stood out during the Kings win over the Suns Wednesday wasn’t Hield’s offense. In fact, he scored a total of seven points. It was Hield’s defense that made a statement. After being maligned much of the season for his defensive tenacity, he helped hold Devin Booker to 6 of 26 shooting on the night.
The last time Hield visited Oklahoma City, it was not a good time in the season for him. The rookie from the University of Oklahoma was enduring a subpar campaign when the New Orleans Pelicans came to town Dec. 4.
While the Pelicans lost to the Thunder, Hield had a solid showing with 16 points in only 15 minutes. He later credited the trip back ‘home’ to turning around his season.
Hield is now teamed with a young group of players looking to turn around the Kings franchise. Along with Skal Labissiere and Willie Cauley-Stein, Hield and the Kings seem to be on the right path. They enter Saturday winners of two straight.
“They are playing a lot of different guys right now,” Donovan said. “I would say with Cousins being out that their front court (players) have maybe had more of an opportunity. I think the guys they put on the floor can create and generate offense on their own. They’ve taken a lot of 3s. They are a very aggressive team.”
Michael Kinney is a freelance writer with Eyeamtruth.com
March 18, 2017 0